“When I look at Your heavens, the work of Your fingers, the moon and the stars, which You have set in place, what is man that You are mindful of him, and the son of man that You care for him?” (Psalm 8:3-4, NIV)

The James Webb Space Telescope has just given us its first images. And they are groundbreaking.

Included in these images is the deepest infrared view of our universe ever taken, capturing starlight over 13 billion years old. With a myriad of entire galaxies in one slither of the universe, one can’t help but marvel at the greatness of our Creator. 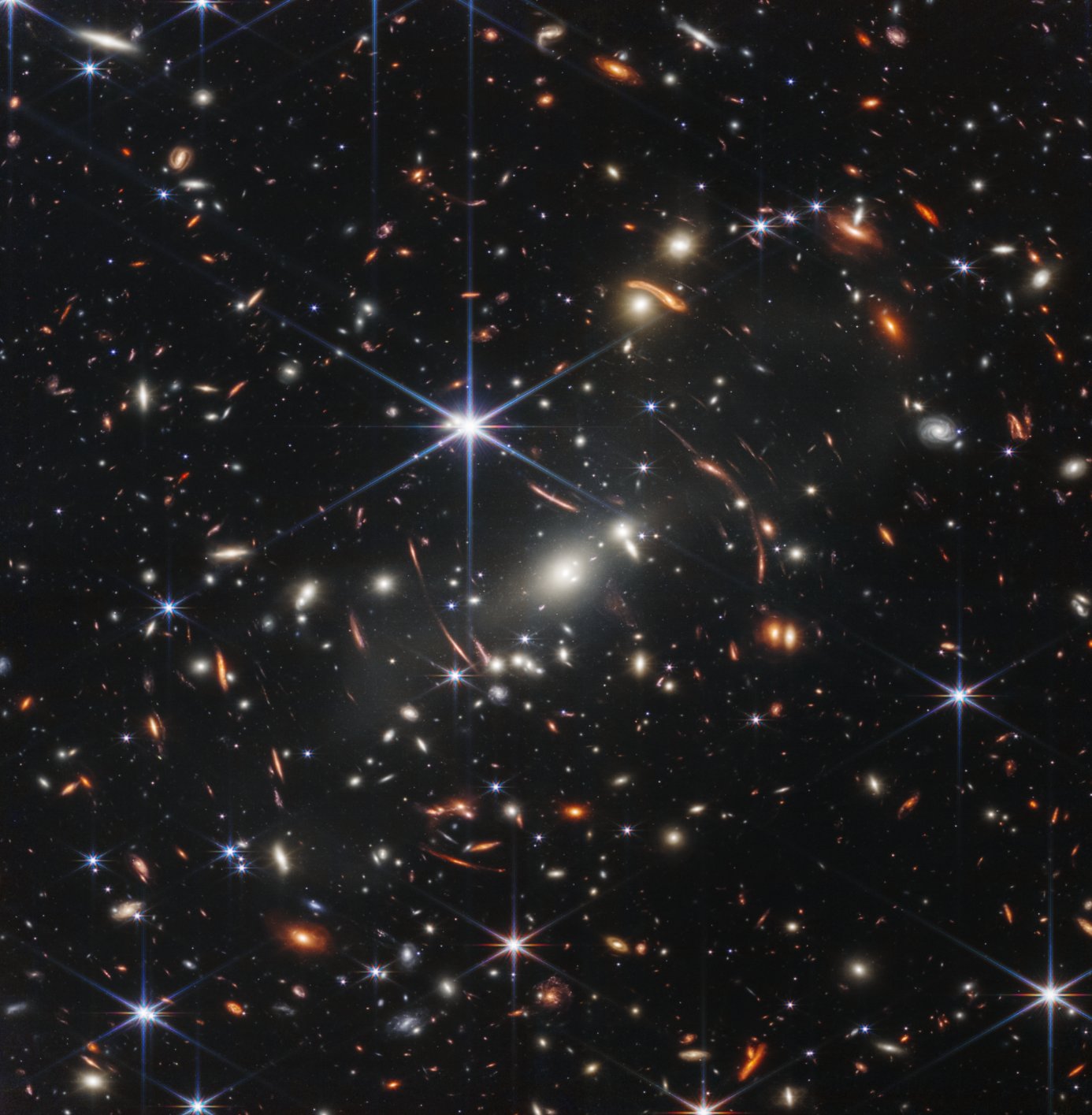 This photo shows gravitational lensing and many bright galaxies, but the smaller, fainter, less distinct galaxies in this image are some of the oldest light ever detected by a human-made object. Photo: NASA/STScI

“Just one little speck of the universe.”

“If you held a grain of sand on the tip of your finger at arm’s length, that is the part of the universe that you’re seeing,” NASA chief Bill Nelson says.

To get an idea of scale and just how much sharper the Webb photographs prove to be, we suggest exploring all of the images interactively on a map of the universe from the American Astronomical Society’s WorldWide Telescope.

This historic reveal is holding the world in a moment of humble awe and contemplation, a natural response to gazing at our vast cosmos. In his article on science and faith, ISCAST Fellow James Garth writes:

What’s next for Hubble and Jennifer Wiseman?

“Hubble’s unique view of ultraviolet and visible light will be an essential scientific partner with JWST’s infrared observations in order to compare galaxies at different cosmic times, deduce the composition of exoplanet atmospheres, and study the dynamics of stars and planets.” 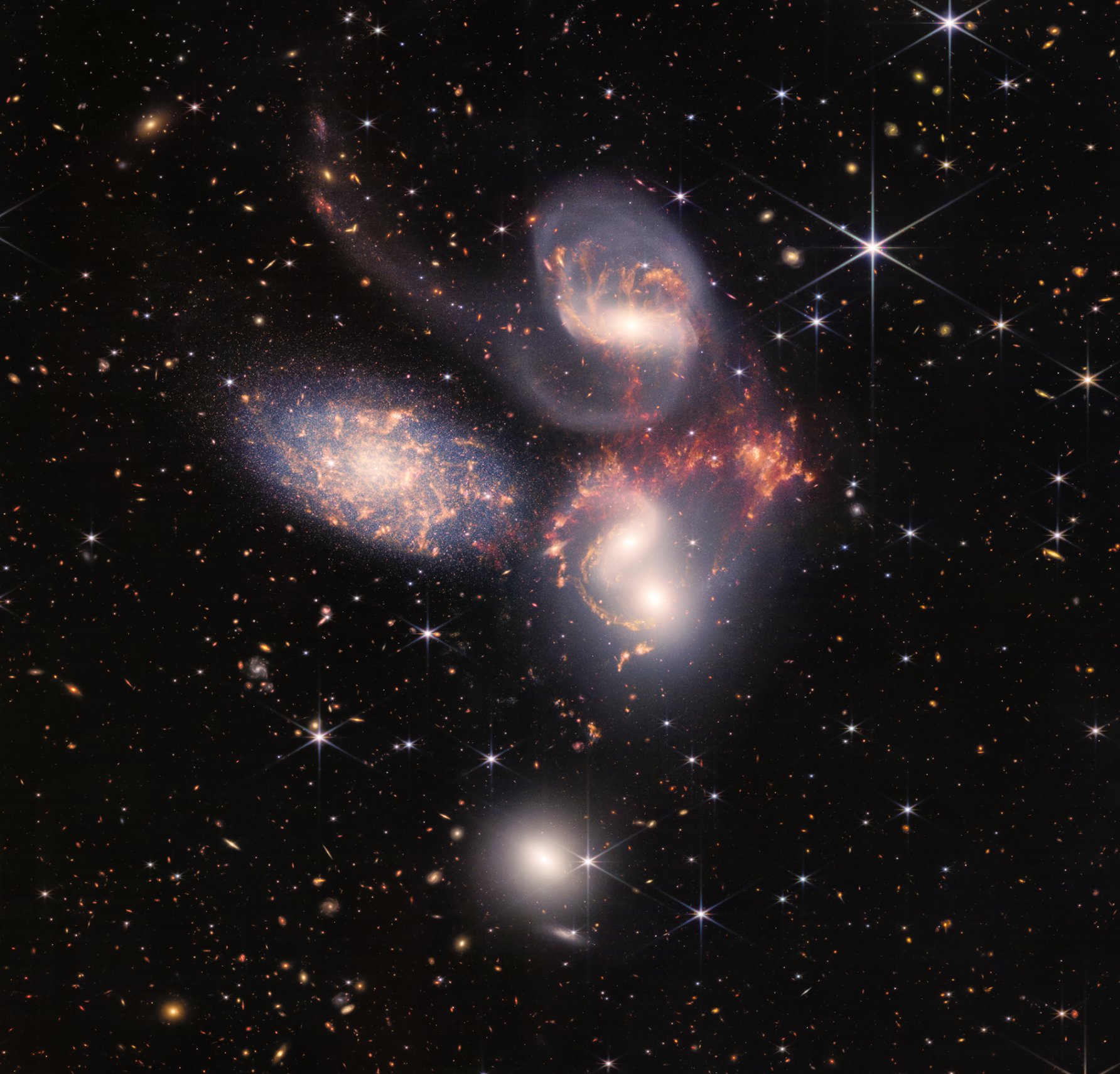 Galaxies collide in Stephan’s Quintet, pulling and stretching each other in a gravitational dance. Photo: NASA, ESA, CSA, STSCI

News
Now Hiring: Part-time Project Coordinator for “The Forest Underground”
News
Science teacher, Evan Leed, created a timeline of science history
News
Out now: “Inside the Cochlear Implant Story” by Graeme Clark
News
Why trusting God first is vital for biologist Caleb Dawson
News
Jacob Martin named one of the ABC’s 5 young heroes in science
News
“The Forest Underground” Shortlisted for Australian Christian Book of the Year 2022
News
A Google engineer claims that a chatbot has become a person. How does he know?
News
What would you like to see at the Conference on Science and Christianity 2022?
News, Reflections
Reflections on Reconciling Science and Faith
News
Religious Concerns About COVID‑19 Vaccines: From Abortion to Religious Freedom
News
Hope for a Planet in Crisis: Tony Rinaudo and Tim Costello Launch “The Forest Underground”
News
The ISCAST Transhumanism Research Project: Can You Help?
News
“Science and Christianity” now available to order
News, Watch and Listen
Richard Dawkins & Francis Collins Debate: Biology, Belief, and COVID
News, Watch and Listen
The Love of Wisdom: Science and Faith in Conversation with Tom McLeish and Paula Gooder
News
Can Science and Faith Be Friends? Chris Mulherin Speaks at Presbyterian Ladies College