ISCAST is a network of people, from students to distinguished academics, exploring the interface of the sciences, technology, and Christianity. We are convinced that Christian faith has much to say in engagement with the sciences, and we are concerned that so many people, both outside and some within the Christian church, think that there is a destructive conflict between faith and science.

The rapid development of science and technology has left many people bewildered, leading some to accept a naturalistic, “science-only” mindset, while others retreat to a fundamentalism that rejects much of mainstream science.

With Christians throughout history, ISCAST stands for another way: a dynamic dialogue that critically engages with both Christian faith and the sciences, allowing each to contribute to our understanding of the other. For over 30 years ISCAST (formally, the Institute for the Study of Christianity in an Age of Science and Technology) has promoted the harmony between faith and the sciences.

ISCAST runs conferences and public lectures, speaks in schools, churches and theological colleges, and provides resources to promote a healthy relationship between the sciences and Christian faith. Keep up with ISCAST by subscribing to our newsletter, or you can contact us.

To invite a speaker to your school or church or other group, please contact us.

To engage Australians in constructive conversation between Christian faith and the sciences.

We are committed to the gospel of Jesus Christ as expressed in the Bible and outlined in the Nicene Creed.

We value rigorous scientific research because it reveals truth about God’s creation, assists believers to fulfil God’s purposes, and contributes to the common good.

We value conversations that are characterised by grace, humility, and love, as we seek the truth, being open to new ways of thinking and respecting the insights of the past. 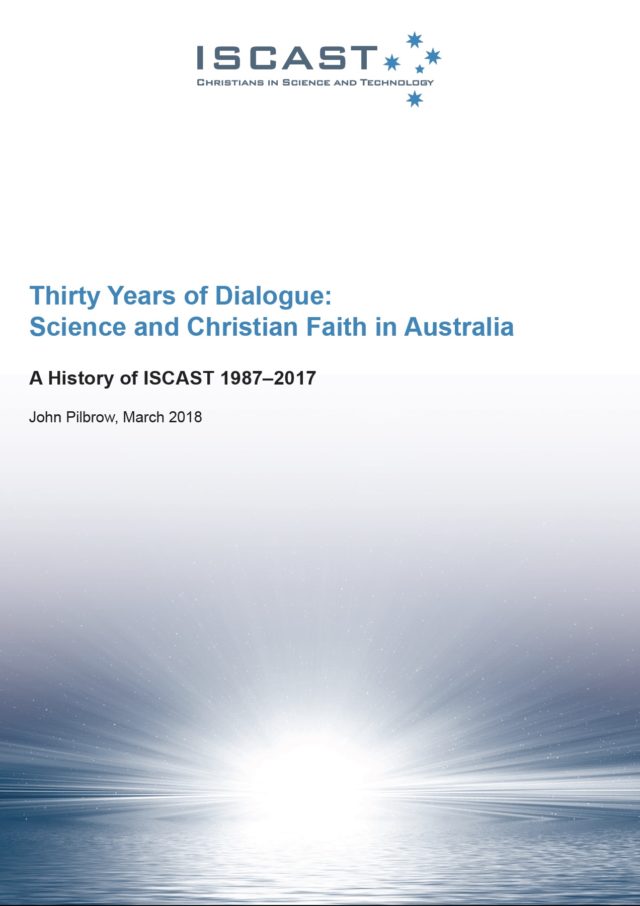 Below is a short commentary on the history and place of ISCAST in Australia. A longer detailed history of ISCAST has been written by former ISCAST president John Pilbrow and is available here for download as a PDF.

ISCAST—the Institute for the Study of Christianity in an Age of Science and Technology—is the oldest and largest science and religion organisation in Australia. It was established under the ISCAST name in 1987, with its roots in the Research Scientists’ Christian Fellowship. (See the current ISCAST legal governing document.) The early years were focused on fellowship amongst scientists and in promoting the message that science and the Christian faith need not be enemies. To this end, the Institute published papers, which, with increasing use of the internet, became the ISCAST online journal Christian Perspectives on Science and Theology. At that time the organisation was largely made up of Protestant evangelicals who worked within the physical sciences.

Over the years, the focus of ISCAST broadened to include social, political, medical, and ecological sciences as well as specialists in technology, theology, and philosophy. ISCAST’s membership also broadened to include Roman Catholic and Orthodox scientists and theologians. As well, more younger people, more women, and more non-Caucasian people have joined our ranks—all groups that were historically underrepresented.

Following the appointment of our first Executive Director in 2017, we have seen an increasing public engagement presence and our staff team has grown to six part-time members, five of whom have higher degrees and a range of expertise covering science, theology, and philosophy.

However, we recognise that many non-religious thinkers believe that religion has little to contribute to the sciences and that there is no basis for dialogue. We are also aware that some within the Christian community believe that science is, at best, a peripheral concern and perhaps even idolatrous, and that dialogue is not a priority. Because these views persist in many segments of society and the Christian church, ISCAST remains convinced of the need to take the initiative in establishing and maintaining dialogue. Hence, ISCAST’s activity is wide-ranging, from academic peer-reviewed literature to public engagement in schools and churches.

We are convinced that this dialogue will benefit not only individuals in their professional context, providing pastoral support, mentoring, and encouragement in their personal challenges, but that the dialogue also benefits both the Christian church and the wider community. Churches struggle with the apologetic challenges posed by the rapidly developing sciences, and the wider community is benefitted as the insights that this dialogue generates are offered winsomely to our society, which is faced with progressively more complex problems.

In this light, ISCAST continues to be committed to the need for both research that brings together science and theology, and also for scientific and Christian thinking to be integrated in the thinking of Christians working within the various sciences, as well as in the lives of clergy, theologians, and indeed all Christians, who find themselves immersed in the modern techno-scientific world.

In short, in an increasingly global and secular scientific culture, the science-faith conversation is at the cutting edge of Christian engagement. ISCAST engages Australians in this conversation, calling people to take the message of Jesus seriously.