Book Review—Wired for war: The robotics revolution and conflict in the 21st century | ISCAST – Christianity. Science. In conversation.

Book Review—Wired for war: The robotics revolution and conflict in the 21st century 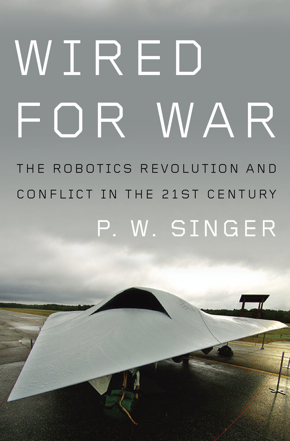 Wired for war: The robotics revolution and conflict in the 21st century

In Wired for war, political scientist and author Peter W Singer (not to be confused with the well-known Australian philosopher and ethicist of the same name) has crafted an expansive, riveting, provocative and at times explosive account of the game-changing revolution currently unfolding in robotics technology and its application to 21st century military and paramilitary operations.

Like a high-altitude UAV loitering over a battlefield, Singer provides the reader with a panoramic view of a rapidly-changing technological landscape, frequently zooming in to a multitude of specific development programs and the colourful personalities that are driving them. From unmanned mine-hunting submarines, past the ominously-named SWORDS, to insect-like robots called ‘PRAWNs’ that swarm to provide reconnaissance or overpower an adversary, we are guided through a dazzling array of automated systems that Singer compellingly argues are changing the face of warfare.

Singer’s generous use of interconnected vignettes, personalities and anecdotes not only keep the book entertaining, but serve a wider methodological purpose. His approach deliberately follows the strategy of modern-day ethnographers who collate individual stories and anecdotes in order to discern broader trends. The result is a magisterial work about robotics that is often very human, a page-turner that succeeds in being both exhilarating and sobering, able to elicit wonder and horror in equal measure.

Wired for war’s greatest strength is the way in which Singer seamlessly integrates cutting-edge insights from revered Gen-Y sources such as Wired magazine and Gizmodo, with more austere, old-school wisdom and historical perspectives. His encyclopaedic knowledge of technology, military history, and pop-culture references – he is equally at home quoting Turing or Total Recall – adds spice to the scholarship. Fortunately, such insights are always pertinent and frequently salient; as we soon learn, in the robotics revolution, it is often pop-culture itself that fuels the drive for innovation (the Raytheon-led effort to re-create the touch-screen interface in Minority Report being but one example).

The heightened potential of these technologies to both harm and heal is extensively underscored, and is indeed the book’s primary take-home message. It is impossible not to be awed by a breakthrough DARPA-funded research project that helped a paralyzed man gain a new lease on life by harnessing his thoughts to control computer programs, communicate and play games. Few of us would have any problem in letting a robot defuse an IED, and the prospects of computer-augmented non-lethal weapons, which are also discussed in detail, seem to at least be worthy of ethical debate. As one professor puts it:

The combination of robotics and nonlethality could be incredibly important. Instead of ‘killing them all and letting God sort them out,’ you could have systems that just zap them and let the police then come in.

Yet the ‘shadow side’ of the robotic revolution is never far from the surface. There are extreme examples, such as laser-equipped drones that (in the frightening words of an actual military requirement spec) are designed to cause

instantaneous burst-combustion of insurgent clothing, a rapid death through violent trauma, and more probably a morbid combination of both.

There are also more subtle effects, such as the emergence of new forms of PTSD experienced by human operators whose engagement with the ‘real’ world of the battlefield is becoming increasingly remote. For instance; an unmanned vehicle controller in his twenties can now experience a day of intense combat at a control station in Nevada, 7,500 miles away from the action, yet come home to his family at close of business.

tells one pilot. Such developments are radically changing the definition of what it means to ‘go to war’.

Most critically and surprisingly, this is a book about history. Virtually all of the programs and technology that Singer describes are already operational, and many have been deployed in fields ranging from the US-Mexico border to the battlefields of Afghanistan. This brings to the very forefront the major dilemma of the robotics revolution: that it is already underway and once again our ethical codes and antiquated political and social frameworks are left on the sidelines, struggling to catch up.

Amidst such a cacophony, Singer issues an earnestly humanitarian call for us to wake up and consider the ethical impacts of autonomous robotic agents. How will they challenge our notions of ‘personal responsibility’?

Who is morally culpable for the actions of a war robot – its designer, manufacturer, operator, or political master? Will the definition of what constitutes a ‘war crime’ evolve? How seriously are we taking the effects of human desensitization to remote killing? And should we even be preparing ourselves for a potentially violent neo-Luddite backlash to this perceived technological takeover?

For those with an active interest in contributing to the ethical debates – whether from a religious perspective or otherwise – I would go so far as to say that Wired for war ought to be compulsory reading. It shines a radar- like beam on developments that are unfolding before our very eyes, and the stakes couldn’t be higher.