When I Pray, What does God do? - book review | ISCAST – Christianity. Science. In conversation.

When I Pray, What does God do? – book review 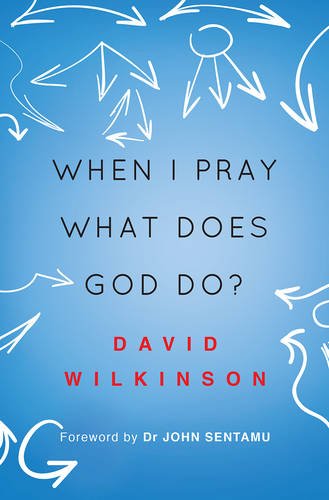 When I Pray, What does God Do?

A review by John Pilbrow

In this excellent and very readable monograph, Methodist theologian, Professor David Wilkinson, Principal of St John’s College, Durham, ponders the question as to how God answers our intercessory prayers. Committed to taking both the Bible and science seriously, and with doctorates in both astrophysics and theology, he is well placed to bring our understanding of prayer into the 21st century.

The author deals honestly with life’s realities, particularly in the face of apparently unanswered prayers, such as when a loved one is found to have a debilitating illness. His wife, also a Methodist minister, suffers from rheumatoid arthritis, which, though controlled with medication, has not been cured! Because of her work for God’s kingdom, “she has had many people praying for her health – this intensifies the difficult questions concerning prayer.”

He goes on to reflect, “My own personal experience of science and, to a lesser extent, suffering, makes me question a whole number of aspects of prayer and how God answers … my experience of God in the Bible and in my daily life continues to encourage me to pray expectantly that God will act … this I hope, is not because I simply live in two different worlds, shutting out the difficult questions by immersing myself in loud chorus and sheltering in a bubble of Christian subculture.”

In Chapter 2, Wilkinson exposes seven everyday myths that not only misrepresent the character of God but lead to unrealistic expectations when we pray. These include ‘the slot machine of faith God’, ‘the health and wealth God’ and ‘the are you ready for a miracle God’.

Noting that “biblical material on how God answers prayer is not straightforward,” Wilkinson appeals to many familiar examples of prayers from both Old and New Testaments to provide a context for our own praying today consistent with the practice of Christian prayer down the ages.

Turning to 20th-century discoveries of quantum mechanics and chaos theory for possible insights into God’s actions, the author asks whether the counter-intuitive “unpredictability of the quantum world” gives “freedom to God to work within the scientific laws of the universe in unusual ways”? On the other hand, he wonders whether chaos theory, which emerged from the unpredictability of complex dynamical systems in the context of weather forecasting, might be “even more significant than quantum theory because it is about systems not at the microscopic scale but at the macro scale.”

The author laments that much contemporary theology remains locked in an outdated scientific past, particularly a Newtonian (or clockwork) worldview, where biblical miracles are believed to violate the laws of nature. However, today we understand that while “scientific laws are the regularities that we have discovered about the universe … It may be that some phenomena appear miraculous not because they are breaking scientific laws but simply because they reflect a deeper, truer reality.”

Further, Wilkinson is deeply concerned that many scientists within the churches who sense that their work is a calling from God do not feel that the church either

recognises or values their calling. He would like to see “churches thank God for the gift of science” as a much-needed antidote to negative responses and attitudes.

In reflecting on the nature of God, Wilkinson asks, “what if God chose to limit himself not just to the giving of freedom to human beings but gave to the universe a degree of freedom to explore its own potentiality?” So, “If God has granted some freedom both to human beings and the physical process, it would be difficult to understand if he did not reserve some freedom for his own action.”

Two practical observations particularly caught my attention. The author considers that much of our praying is about trivial issues. For example, he questions “why [should God] produce a parking space for a Christian who could probably benefit from a little walk by parking further away?” Once, after praying for and laying hands on a man who sought prayer for healing, the author asked whether he had been to see his doctor. The man replied, “That’s not very spiritual,” to which Wilkinson retorted “to go to see a doctor is very spiritual! … The skill of the doctor is made possible by being made in the image of God, and the human body’s own powers of recovery … are made possible by God.”

The final chapter is about praying in the light of what God does. For example, God both sustains the laws of nature and responds to our prayers.

The preface by Dr John Sentamu, Archbishop of York, is a fine endorsement of the book. He encourages us not only to read it but also to take its message to heart.

A minor shortcoming is the absence of an index.

John Pilbrow is Emeritus Professor of Physics, Monash University and a Life Fellow of ISCAST.