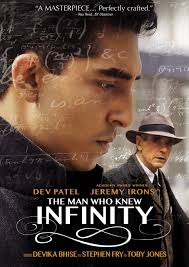 A review of the film The Man Who Knew Infinity
Katherine Seaton, May 2016
Download PDF

The Man Who Knew Infinity: a must see film

A review by Katherine Seaton

God made the integers, all else is human-made. Leopold Kronecker (reported 1893).

Mathematics is the science of skillful operations with concepts and rules invented just for this purpose.

Eugene Wigner in The Unreasonable Effectiveness of Mathematics, Communications in Pure and Applied Mathematics 13 (1960).

The Man Who Knew Infinity depicts the six year period from the recognition of the potential of the Indian genius Ramanujan by the Cambridge mathematician Hardy, to his early death. For people of faith who are also people of science, I think it is a must-see.

This movie is based on the book of the same name by Robert Kanigel (which I have read), and I think also the reminiscences of Hardy about Ramanujan (which I have not). I first became aware of Ramanujan some twenty years ago, because of the Rogers-Ramanujan identities (and their generalisations) that play an important part in the exact solution of models in statistical mechanics and made their way into my PhD thesis. They are deep but simple formulae that relate infinite sums to products, and could well be part of the backdrop of mathematical equations on the movie poster!

Like many ‘based on true events’ movies, The Man Who Knew Infinity puts words into characters’ mouths that they may never have spoken, and moves incidents around, for emphasis or artistic reasons. For example, a famous sick-bed anecdote about the taxicab number 1729 is strategically placed at Ramanujan’s departure from England and then re-enacted between Hardy and a third mathematician, Littlewood. The movie also makes Hardy much older than Ramanujan (though the age difference was only about 10 years) and Ramanujan’s wife much closer in age to him, though in fact she was 10 at the time of their arranged marriage, and did not live with him (and his helicopter mother) until she was 13; she was 15 and he 26 at the time he left for Cambridge and they may never have shared a bed. In this way, the writer and director (Matthew Brown) makes the emotional distance between Hardy and Ramanujan more understandable, his marriage more acceptable to modern audiences, and the five year separation from his wife more poignant.

There are two themes in the movie which are important for students of mathematics. The central one is the necessity for arguments that convince other people of the correctness of your mathematics, the concept of rigorous proof. Hardy (Jeremy Irons) articulates this repeatedly both to Ramanujan (Dev Patel) and to others in speaking about him. Several reasons have been put forward as to why Ramanujan found this troublesome. These include him being largely self-taught; he had been exposed to very few mathematical books apart from one which was a synopsis of 6000 known mathematical formulas, and he based his own notebooks of precious paper on that presentation (his rough work being done on slates and immediately erased). He had also never been able to submit himself to the requirements to get a degree in mathematics, and once he was sure of something he wanted to move on to the new ideas which came so quickly to him. Whether he was genuinely puzzled that others could not see something once he had pointed it out, or hurt that they did not believe him that it was true, his personality also played a part.

The second theme is that of what it means to be a genius. It is not a word to be thrown around lightly, as this movie shows; Ramanujan interacted with some of the best mathematicians of the time, astounding some and angering others. (By the way, a very nasty professor in the movie, Howard, is not a particular real person; Ramanujan did once jump up in a lecture and add results to the blackboard, but this incident was reported to Hardy with good humour and admiration by the lecturer involved, Berry. It did not have shocking ending shown in the movie.) I’ve read somewhere (though I can’t find where) that genius would be like an athlete not just being able to jump a few centimetres higher than other people to break a record, but jumping twice or three times as high. It can be a heavy burden, and there is so much about Ramanujan’s life, and his untimely death at age 32, that is tragic.

I had read a number of reviews of the movie before going to see it (and have read several others since). What they mostly ignore, or describe as ‘culture, class and race’ differences, is that Ramanujan was a devout Hindu Brahmin, and Hardy a professed atheist. This leads to the third theme that resonated with me in the movie, the question of whether mathematics is invented or discovered by humans, and the related one of the role of religious faith and belief in divine truth as inspiration in that process.

Ramanujan performed puja (devotion, prayer and meditation), and attributed at least some of his mathematical results to the inspiration of the goddess Namagiri. Leaving India was a huge matter for him, as he had to compromise his purity by crossing the ocean. He was willing to trust only food prepared by other Hindus, which most of the time meant himself. Hardy had his own rituals; he would carry an umbrella and a briefcase full of work as if off to the library when going to watch his beloved cricket, stating that this would cause God not to send rain. As Ramanujan remarks in the movie, this suggests rather than being an atheist, he actually believed in a god that did not like him very much. In his later reminiscences, Hardy suggested that religion for Ramanujan was not a matter of conviction, but only of observance. Most commentators disagree with Hardy. The number theorist George Andrews (the discoverer of Ramanujan’s Lost Notebook) wrote:

Hardy was Ramanujan’s great benefactor and was also a man who referred to God as his personal enemy. If you were Ramanujan and you were speaking about religion with Hardy, what could you say that both would be an honest statement consistent with your religious beliefs and would not antagonize your great friend?

The movie suggests a rapprochement, having Hardy give verbal assent to this statement of

Ramanujan’s – an equation has no meaning for me unless it expresses a thought of God – repeating it in a eulogy. In fact, it was reported in 1967 by the Indian mathematician Ranganathan, a

contemporary of Ramanujan’s, who went on: To me, that single remark was the essence of Truth about God, Man and the Universe. In that statement, I saw the real Ramanujan, the philosopher mystic-mathematician. Hardy does, however, write elsewhere of mathematics as being ‘true’ (not only ‘correct’).

The mathematics portrayed in this movie is accurate but not intimidating; you can comfortably take non-mathematicians to see it with you. Two prominent mathematicians, Ken Ono and Manjul Bhargava, were consultants, even coaching the actors on how to write mathematics on screen. Only a few of Ramanujan’s over 3,900 mathematical results feature, and they have been carefully chosen to be accessible: results about partitions (which are explained by Hardy to a college servant who stands in for the general audience), and about prime or composite numbers. The architecture of Cambridge, its cultivated lawns and elegant courtyards populated by dons in suits and black gowns, contrasts with the scenes of India: temples, the beach, brilliant saris, and ultimately the white garments worn around the traditional Hindu funeral pyre. Three meal-time images stood out to me: Ramanujan watched adoringly by wife and mother as he ate, his lonely vegetarian meals improvised in his rooms during the shortages of the Great War, and the magnificent dining hall of Trinity College in which he found no sustenance, physical or emotional. There are other themes too, of mono- culturalism, racism, war, love and loneliness, the stranger in our midst, and family dysfunction, which speak to everyone.

The Man Who Knew Infinity opened in Australia on May 5th in a relatively small number of cinemas and it may not enjoy a long cinema run. I strongly recommend it.

Another review of the film by an Australian mathematician can be found here: https://theconversation.com/the-man-who-knew-infinity-inspiration-rigour-and-the-art-of-mathematics-59520