Book Review—Why There Almost Certainly Is A God | ISCAST – Christianity. Science. In conversation.

Book Review—Why There Almost Certainly Is A God 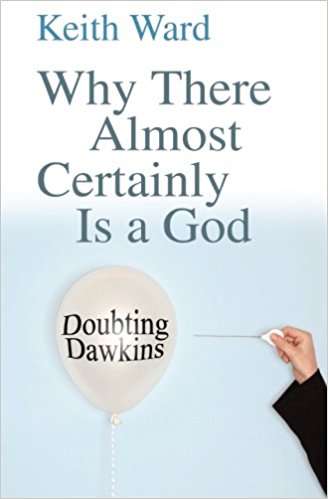 Review of Keith Ward’s book ‘Why There Almost Certainly Is A God‘
James Garth, May 2009.
Download PDF

Why there almost certainly is a God

Keith Ward’s latest foray into popular philosophy and theology Why there almost certainly is a God is enlightening, entertaining, elegant, and quite simply a delight to read from cover to cover.

In just 160 pages, Ward has managed to give us perhaps the most sophisticated refutation of the ‘New Atheism’ produced to date. And yet, to simply categorize it as a reflexive reaction to pop culture atheism would be a grave injustice, since Ward has simultaneously crafted a crisp, positive, standalone apologetic that even those inclined towards atheism have found ‘stimulating and elegant’ (Phelan 2008).

Part One is essentially a philosophical primer, where Ward reminds us that the radical materialism which has carved itself a niche within a portion of present-day scientific intelligentsia is but one of a number of philosophical worldviews which remain hotly contested:

In the world of modern philosophy there are idealists, theists, phenomenalists, common sense pragmatists, scientific realists, sceptics and materialists. They are all going concerns, living philosophical theories of what is ultimately real.

Ward carefully probes the weak points of radical materialism, using many of the same tactics that contributed to the demise of its philosophical progenitor, logical positivism. After all, he notes, ‘What is the point in being a materialist when we are not sure exactly what matter is?’. 2

1 Even the title itself is a nod towards Dawkins’ best-selling polemic (Dawkins 2006). Ward writes: ‘The title of this book is the title of Chapter 4 of Professor Richard Dawkins’ best-selling The God Delusion, with one little difference. I have changed the word “no” to the word “a”, because I think that change reflects the situation more accurately’.

2 It seems to me that in a universe where ‘imaginary time’, probability waves, Hilbert spaces, and flickering virtual wave-particles are truly ‘real’, at which point can we honestly draw the materialist line? On what grounds can we rationally exclude so-called ‘spiritual’ explanations from the table?

From here, Ward segues naturally and persuasively into his core case that the ‘God hypothesis’ is ultimately a philosophical or metaphysical hypothesis, not a scientific one. Scientific observations or experiments may help to inform our choice of whether or not this hypothesis is more plausible than its rival competitors, but fundamentally science has been — and will remain — unable to devise a neutrally testable, repeatable experiment that could conclusively adjudicate between them.

In Part Two, Ward makes the case that the God hypothesis is the most elegant, economical and coherent of all the metaphysical options on the table, marshalling many persuasive arguments in support of this contention (my personal favourite being the one in which he ‘Exterminates superfluous turtles with Occam’s Razor’).

Within this section Ward dedicates considerable time to providing a systematic refutation of Prof. Dawkins ‘Ultimate Boeing 747 Gambit’ argument against the existence of God (Dawkins, 2006). Readers will

certainly need their thinking caps on at this point, as other reviewers (Saxbee 2008) have cautioned3. Ward does not shy from the use of sophisticated reasoning and linguistics to challenge Dawkins’ understanding of what constitutes ‘simplicity’, but patience with this section will pay off, as I feel that Ward’s critique is sufficient to greatly undermine the efficacy of this argument.

Perhaps the area that I found most interesting of all was Ward’s observation of the baffling consequences of the ‘Extreme Multiverse’ hypothesis. Ward wryly notes that if there are indeed an infinite number of universes, than surely at least one will exist in which miracles are possible!

More disturbingly, in some universes, it’s a logical necessity that I would exist in a decidedly homicidal incarnation as someone who ‘kills and eats his mother’. This is every bit as possible as existing ‘with a blue moustache’ — to quote Dawkins’ rather tame example (Dawkins 2006), and its consequences are so disturbing they border on the absurd.

In fact, the sheer extravagance of the ‘Extreme Multiverse’ hypothesis leads me to conclude that it has some serious questions to address regarding coherence and parsimony before it can hope to gain traction against the theistic alternative.

Finally, Part Three is dedicated to an updated retelling of Thomas Aquinas’ famous Five Ways, to which Ward dedicates a full eighteen pages (Dawkins takes just three pages to dismiss them!). This section is a welcome return to the sort of classical, amicable philosophical discourse that seems to have been so lacking in recent years in the public sphere.

3 I concur with Saxbee that ‘This is the most challenging part of the book, but it is philosophically very satisfying’.

Finally, interspersed throughout the book are a number of additional buried nuggets and titbits of interest. For instance, Ward’s brief interlude concerning the notion of progressive revelation and understanding of God (pp. 63–66) is perhaps the most accomplished and succinct that I’ve ever seen on this topic.

In similarly succinct fashion, Ward concludes his book by painting a vision of Christian hope that he argues is a logical consequence of the existence of the sort of God that he has thus far been seeking to describe. It is worth quoting in full:

… if there is a God, then moral endeavour will not be in vain. Such endeavour may often entail self-sacrifice or even martyrdom in the cause of justice. A creator God who creates in order that goodness may flourish will ensure that justice will be victorious, and will not be defeated by human failure or death. This is not mere ‘pie in the sky’, but a logical consequence of believing in a good and powerful creator. It means that moral effort will never be in vain, even if its consequences are not what we immediately expect or hope. It means that there will be a life beyond this-worldly death, and there will be judgment, and the possibility of forgiveness and fulfilment.

It is my opinion that books like this are vitally important in helping to craft an intellectual milieu in which genuine Christianity will thrive. Beyond anything else, Ward succeeds because he makes theism seem so very, very attractive.

Phelan, L 28 September 2008, Why there almost certainly is a God, by Keith Ward, The Independent, viewed 14 March 2009, http://www.independent.co.uk/arts- entertainment/books/reviews/why-there-almost-certainly-is-a-god-by-keith-ward- 942327.html