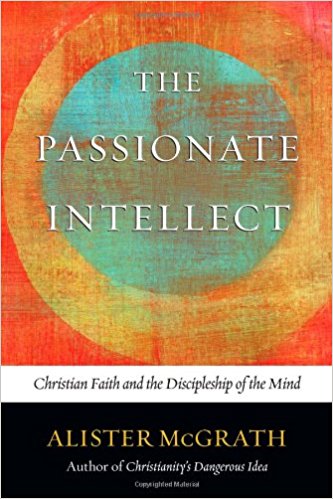 The passionate intellect: Christian faith and the discipleship of the mind

Alister McGrath is a prolific author at the best of times, but during 2010/2011 he has surely outdone himself, publishing – at my count – no fewer than eight (yes, eight!) new books, spanning the genres of apologetics, science & faith, academic theology, and even children’s fiction.

One of these books, The Passionate Intellect, is a unique compilation of McGrath’s previously unpublished lectures, papers and talks given at universities and colleges in recent years, substantively re-written and woven together into a cohesive whole. McGrath’s core objective is to stimulate the reader to embrace the study of ‘mere theology’1, as a pursuit that can enrich one’s faith and deepen our engagement with the world around us (p. 8). In this regard, the book is admirably successful. As someone who has often found the field of theology frustratingly arcane and frequently under-determined by the data, I was personally challenged and encouraged by the unique vision of theology painted by McGrath in The Passionate Intellect.

Using the evocative image of ‘theology mapping the landscape of faith’, McGrath begins by suggesting that the proper purpose of theology is to help us articulate, deepen and communicate the Christian vision of God in all its fullness and wonder (p. 22). He suggests that theology is a pursuit that is decidedly corporate; the landscape of faith being so vast that no individual can fully comprehend its panorama. Theology helps the individual Christian by identifying aspects of the landscape that may have been overlooked or filtered out, whilst simultaneously offering helpful correctives to individual, subjective descriptions of the landscape.

Further essays provide various meditations on topics as diverse as the transformative power of the Gospel, the perspectives of C.S. Lewis and Martin Luther on suffering, and the role of theology in apologetics (again, using the helpful image of ‘illuminating the landscape’) and the interplay between imagination, emotion and reason. The book also contains perhaps the most complete personal account that McGrath has given of

1 Indeed, this book was previously published in the UK by SPCK under the title Mere Theology.

his journey to theism (contained in Chapter 7, which focuses on the natural sciences), and it makes for fascinating reading.

Of all the chapters, I found the essay on ‘Religious and Scientific Faith’ to be especially interesting and innovative. Using the case of Darwin’s Origin of Species, McGrath teases out some surprising similarities between scientific endeavour and religious faith, echoing the thoughts of William James’s idea of faith as a ‘working hypothesis’. Darwin’s theory, he argues, was not empirically proven at the time, and instead required an inference to the best explanation at key points. The same process can also be seen at work in religious thinking (p. 135). Both the natural sciences and religions offer what they believe to be warranted, coherent and reliable explanations of the world. The manner in which McGrath harnesses Darwin’s controversial theory and spins it in a direction that actually provides a rousing endorsement for modern apologetics is masterful.

The book concludes with two chapters on the New Atheism, and in this area there is significant overlap with his more recent book, Why God won’t go away: Engaging the New Atheism (London: SPCK, 2011). If anything, I found these two chapters in The Passionate Intellect to be superior to the content of Why God won’t go away, possibly because their denser format yields a tighter and sharper focus on the subject.

Whilst some reviewers have found the essay-based format of The Passionate Intellect to be a little disjointed, I was actually very pleasantly surprised by this book’s structure and cohesion. I found the themes to be very neatly tied together and able to lead the reader in a particular direction, rather like stepping stones on a pathway through the garden of ideas.

In conclusion, The Passionate Intellect is a warm and encouraging book filled with surprising depth and imagination. It is well worth a read by thinking Christians of all persuasions. I was delighted to hear that it was the winner of the 2011 Christianity Today Book Award for Apologetics/Evangelism, an award that it richly deserves.