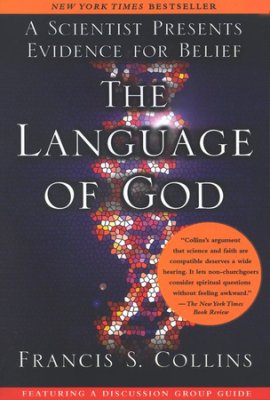 The Language of God:

a scientist presents evidence for belief

This is an excellent book on science-faith issues for the layman, written by the head of the Human Genome Project. Subtitle is ‘A scientist presents evidence for belief’, and this is the angle of approach, starting with the author’s own journey from atheism in his mid 20s, influenced by his growing perception of a Moral Law and by C S Lewis. His transition from maths and physical chemistry to medicine and genetics was a corollary of this.

Some of the reasons for belief he presents are particularly interesting in the light of his autobiographical framework — ‘The Big Bang cries out for a divine explanation’, ‘The chance that all these [15 physical] constants would take on the values necessary to result in a stable universe capable of sustaining complex life forms is almost infinitesimal’ — and they lead him to cogent reasons for a faith position.

His account of the role of DNA (‘God’s instruction book’) ?as it was mapped? through the Human Genome Project is fascinating. In this context we get to Darwin and biological evolution, which is very well and strongly handled. Dobzhansky is quoted with approval: ‘Nothing in biology makes sense except in the light of evolution’.

The third part of the book is a more traditional coverage of the relationship between science and faith, notable for being North American and a little more outspoken than I am used to. On Creationism Collins is forthright: ‘Can faith in a loving God be built on a foundation of lies about nature?’. Showing that the only plausible understanding of what comes from certain quarters is that God is the great deceiver, he suggests that ‘by any reasonable standard, Young Earth Creationism (YEC) has reached a point of intellectual bankruptcy both in its science and its theology’.

The outcome of this is that ‘By sending a message to young people that science is dangerous, and that pursuing science may well mean rejecting religious faith, YEC may be depriving science of some of its most promising future talents’. But it ‘does even more damage to faith, by demanding that belief in God requires assent to fundamentally flawed claims about the natural world’. ‘To adhere to the faith of their childhood, they are required to reject a broad and rigorous body of scientific data, effectively committing intellectual suicide.’ So they turn away from faith with its anti-scientific baggage in order to opt for truth. Collins does not labour the point beyond ‘A Plea for Reason’ lovingly addressed to ‘the evangelical Christian church’, but he supports the view that YEC will progressively debilitate many of those parts of the US church which are not already spiritually compromised in other ways, espousing gay ordination etc. The story is all too familiar, but I get more upset every time I am reminded of it.

Intelligent Design is dealt with well, as a modern manifestation of ‘God of the Gaps’. ‘ID portrays the Almighty as a clumsy Creator.’ Dembski is quoted as saying that if advances in scientific knowledge close the gaps, ID is finished. Collins concludes that ‘this outcome is already at hand’. All the iconic ‘irreducible complexities’ have been reduced!

His chapter on theistic evolution, or BioLogos as he prefers to call it so as to de-emphasise evolution, is sound but sad. He suggests that though most scientists who are Christians (understanding God as sovereign Creator) line up there, they will not speak out (as he didn’t until recently), while hardly any theologians are familiar enough with biological science to do so either. So while he asserts this position as being intellectually rigorous and allowing science and faith to be mutually supportive, it is largely unknown in high street and high school USA. Most Americans know of only YEC or ID as Christian positions, and he quotes a frightening 45% as supporting YEC. But the background and partial explanation of this is that aggressive atheism has captured the idea of evolution, with YEC and ID advocates contributing to its stigma. Richard Dawkins gets a serve earlier in the book.

Is it possible to conceive of high-level transdenominational attention being given to addressing this problem? Something like the Council of Nicea in 325AD? The doctrine of creation has never been so obviously relevant to human stewardship of Earth and its resources as today, and nor has science — through medicine, IT, engineering, and now meteorology — been so central to human wellbeing and the aspirations of 6.5 billion of us. Nor has the whole of western civilisation (which relys on science) been under so much threat from mindless fundamentalism. Is a consensus on hermeneutics and epistemology (not to mention eschatology) related to Creation and how we manage it conceivable?

A 37-page Appendix on Bioethics and an index are included. The Bioethics Appendix helpfully touches upon medical genetics, stem cells and cl oning (with positive view of SCNT/therapeutic cloning), heritability of traits and selection for them.