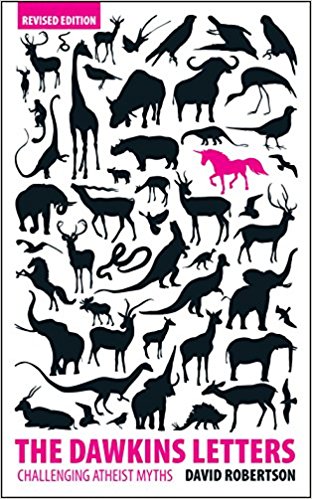 As Bryan Appleyard wryly noted in New Scientist: ‘Whatever else Richard Dawkins’s book The God Delusion may have achieved, it has inspired very grand refutations’ (Appleyard 2007).

Penetrating and cogent essays critiquing Professor Dawkins’ provocative and robustly humorous anti-religious broadside have been crafted by figures as diverse as Terry Eagleton, H. Allen Orr, Andrew Brown and Marilynne Robinson, and a number of thoughtful apologetic ripostes have been penned1, ironically by the very ‘dyed-in-the-wool faith-heads’ who are supposedly ‘immune to argument’2 (Dawkins 2006).

To this ever-growing pantheon of slim texts—which are now sufficiently voluminous as to have earned the rather unaffectionate moniker of ‘fleas’ on Dawkins’ own website forum3—can now be added The Dawkins Letters penned by David Robertson, columnist and pastor of St Peter’s Free Church of Scotland.

From the outset, Robertson cheerfully acknowledges that he is approaching this debate from the position of an educated layman, rather than as a practising scientist, and that his work is an evolutionary outworking of a series of open letters originally intended as a stimulus for online discussion.

Given this heritage, Robertson sensibly maintains an informal, engaging and conversational style, and he is entirely successful in capturing and maintaining the reader’s interest throughout every one of his ten short essays.

1 For an abridged selection, refer to http://iscast.org/new_atheism .

2 In Dawkins’ own words: ‘If this book [The God Delusion] works as I intend, religious readers who open it will be atheists when they put it down. What presumptuous optimism! Of course, dyed-in-the- wool faith-heads are immune to argument, their resistance built up over years of childhood indoctrination using methods that took centuries to mature (whether by evolution or design)’. (Dawkins 2006)

3 The term ‘fleas’ is thus an oblique reference to Dawkins’ own quip regarding Alister McGrath’s publications that ‘It is tempting to quote Yeats – “Was there ever dog that praised his fleas”’ (Dawkins February 12th 2007). Henceforth, any publication that directly responds to ideas presented in ‘New Atheist’ texts frequently has been referred to as a ‘flea’ within the Dawkins community.

For the most part the dialogue remains civil, and is peppered with more humour than one might initially expect from a Scottish Presbyterian pastor. Robertson also enhances the text by weaving in frequent historical insights, including analyses of Weimar Germany and early 20th century eugenics, and these perspectives are frequently enlightening.

As other reviewers have noted, the first few chapters of The Dawkins Letters do come across as somewhat rough, and in fairness I suspect this may be due to the fluid and dynamic environment within which they were originally conceived and composed.

However, ardent seekers ought to stick with this book as it picks up considerably in the second half. Chapters five, seven, eight and nine, in particular, are critically on target and penetrating in their insight.

Atheists don’t bomb or burn? Try telling that to the members of the 77 churches in Norway which were burnt down when some over-zealous young atheists took on board the teaching about how dangerous and evil religion really was.

Please note that using Free Inquiry, A.N.Wilson and Robin Lane Fox as your sources on biblical material is like me suggesting that those who want to find out about evolution should only go to the Answers in Genesis website!

Are you really blaming Mother Theresa, the Pope, Billy Graham, one thousand million Christians throughout the world and even ‘yours truly’ for every lunatic who expresses their emotional imbalance in religious terms? That is as rational as my suggesting that because Dr Josef Mengele was a scientist, all scientists are to blame and therefore science should be banned. The point is simply that anyone could produce a list of fringe mentally imbalanced people on any subject.

That does not invalidate the subject.

…anyone who reads the Bible in context cannot take seriously the suggestion that Jesus only came for the Jews and that ‘love your neighbour’ only meant the Jews. The very parable that Jesus told to illustrate that truth was one which involved a non-Jew. Your re-writing and re-reading of these verses is out of context, dishonest and deceitful special pleading which says a whole lot more about your prejudgments than it does about the Bible.

In a sense I feel that The Dawkins Letters is less about bridge building than it is about serving as a cathartic corrective for those who would otherwise tend to accept Professor Dawkins’ arguments and conclusions carte blanche. It is thus best absorbed as an informal companion to McGrath’s The Dawkins Delusion, which stands as an exemplar of precision, density and brevity.

A final unexpected delight is the recommended reading list that rounds out the book. It is one of the most entertaining and extensive compilations that I have encountered, a goldmine for the enthusiastic student.

My only criticism of this book is that Robertson occasionally strays perilously close to violating his own principle of amicable dialogue by resorting to some hyperbole of his own. One clear instance of this is his critique of Dawkins’ views on multiverses and first-cause arguments (Chapter 6), which I believe could have been achieved without resorting

to ridicule. His quotations, whilst always worthy, are occasionally selective4 which may irk some.

I will have to leave it to my atheist friends to decide whether these diversions sufficiently detract from the book’s overall worthiness, or render it off-putting to those already disinclined towards theistic belief.

Nonetheless, I would still encourage those sitting on the fence to engage with this text, if only to convince them that, in Robertson’s own words:

As one who has participated in several discussions on Dawkins’ own website forum (ironically subtitled ‘A Clear-Thinking Oasis’), I can only empathise with Robertson’s deep concerns about the spectre of fundamentalism that has arisen in the aftermath of the ‘New Atheism’.

For those who have not yet been saddened by the decidedly unscientific and sometimes frightening depths to which this ‘debate’ has sunk, a brief perusal of the caustic comments posted on Robertson’s book preview on YouTube5 ought to quickly shatter any remaining romantic myths of universal atheist rationality. It is this crucial point which Robertson himself clearly grasps and makes abundantly clear right from the very first page.

4 One such minor detail that will probably quickly be seized upon by atheists is Robertson’s selective quotation of Charles Darwin’s own profession of Theism, whilst neglecting to mention his lapse into Agnosticism in his later years.