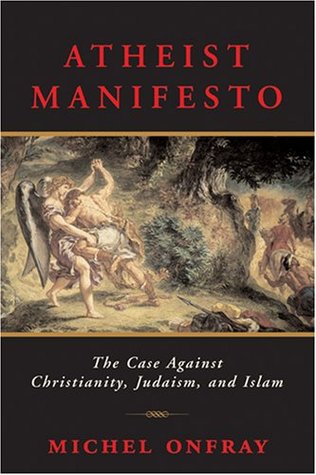 The case against Christianity, Judaism and Islam

I have a confession to make. Immediately after reading The atheist manifesto I remarked to my wife that I was sorely tempted to brand it as ‘intellectual sewage’ and consign it to oblivion on the bookshelf. But, shocked by the astonishing harshness of my own initial assessment, and determined to strive for objectivity (lest my subliminal theistic sympathies be unfairly biasing my critique), I sought out other learned reviews, desperate for some sort of confirmation that Manifesto really was as bad as it appeared.

Regrettably, it was. The Age was scalding, stating ‘It is another deliberately distorted, bile-filled jeremiad’ (Zwartz 2007), while The Sydney Morning Herald was succinct, labelling it simply as ‘a bad, bad book’ (Windsor, 2007). This is a shame, since one would be well within reason to expect much, much more from Michel Onfray, lauded as ‘France’s most popular philosopher’ (Melville 2007).

Sadly, The atheist manifesto is an exercise in bridge demolition rather than bridge building. Unremittingly polemic in style, unrelentingly caustic in its castigation of monotheism — ‘Monotheisms have no love for intelligence, books, knowledge, science’ (Onfray p95) — Manifesto was quite clearly written ‘in a fit of anger’ as its author not unashamedly confides (Melville, 2007).

One wonders whether Onfray’s palpable anger has been accentuated or diminished in Jeremy Leggatt’s florid translation, whose verbose tirades leave no thesaurus page unturned in their quest for the ultimate verbal skewer. Consider these excerpts:

Monotheism loathes intelligence, that sublime gift defined as the art of connecting what at first and for most people seems unconnected.

Fired by the same inborn death drive, the three monotheisms share a series of identical forms of aversion: hatred of reason and intelligence; hatred of freedom; hatred of all books in the name of one alone; hatred of sexuality, women and pleasure; hatred of the feminine;

hatred of the body, of desires, of drives … In other words, life crucified and nothingness exalted.

Monotheism does not really like the rational work of scientists.

The religions of the book detest women. They admire only mothers and wives.

And so the tirades continue…

Onfray’s philosophical project, dubbed ‘atheology’, is outlined in the first quarter of the book, and it is an epic and ambitious one indeed. The stakes are high, and no less than the complete establishment of the non- existence of God, the death of the soul and the non-existence of free will shall suffice. Onfray is consistent enough to anchor ‘atheology’ entirely on atomistic materialism, with the creation of a culture devoted to philosophical hedonism the ultimate vision.

Having enlightened the reader by a revisionist history of atheist thought and after establishing the ground rules of his own project, Onfray proceeds to attempt to demolish the three Abrahamic faiths1, with a particular focus on Christianity. His deconstruction of the historical Jesus, which occupies about a quarter of the book, can be termed ‘radical’ at best. In this section, perhaps more than any other, readers will be exasperated by what may be the book’s coup de grâce; its utter lack of any references or bibliography. One can only conclude that such a contrivance is for mere convenience, obviating Onfray of the need to intellectually buttress some of his more breathtakingly provocative remarks. Consider the following:

None of the evangelists personally knew the famous Jesus.2

Nothing of what remains can be trusted. The Christian archives are the result of ideological fabrication… When an anonymous monk … had before him the Annals of Tacitus or Suetonius’s Lives of Twelve Caesars (and was astonished to find no mention of the story he believed in), he added a passage in his own hand and in all good faith, without shame and without a second thought, without wondering whether he was doing wrong or committing a forgery.

If you are a militant Wahabbist or a Dark Ages apologist with a penchant for flagellation, then Manifesto may cause you to pause and reconsider your worldview. It poses no challenge whatsoever to intellectual theism, whose adherents will most likely find The atheist manifesto to be manifestly inadequate.