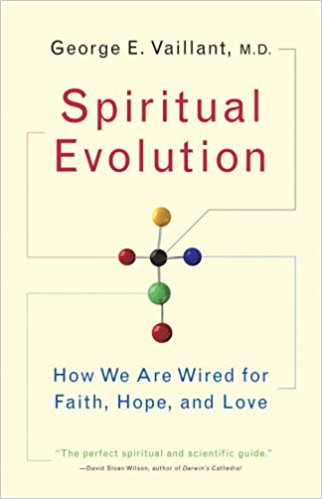 Spiritual evolution: how we are wired for faith, hope and love

Harvard psychiatrist George Vaillant’s book on the positive emotions is a welcome addition to the growing literature on spirituality in medicine. He has studied a cohort of about 320 ‘Grant men’ for nigh on fifty years, so he has a wealth of life-experience behind him. Further he describes that experience using a narrative approach, telling the surprising stories of men of promise who did badly and of those with little promise who did well because they experienced transforming grace and love during their lives. Most recently Vaillant has been involved in the positive emotion movement. This book is the result of five years of reflection on the positive emotions.

Vaillant describes the limbic system by an analogy to New York’s Broadway. Broadway is a description of the theatre district. It does not matter that some of the theatres are not actually located on Broadway; it is the overall atmosphere and culture that is important. Hence to quibble over which bits are included and not included neuroanatomically in the limbic system misses the important point that the limbic system is a useful way of identifying the neurocircuitry of the positive and negative emotions. Such an approach may suit the intuitive and poetic approach taken by Vaillant but it would probably irritate neuroanatomists and other neuroscientists who are trying to identify accurately the actual circuits involved.

Some chapters are almost lyrical, and are intended to be, for Vaillant believes the positive emotions are felt rather than explained. ‘Limbic rather than lexical’ is one memorable phrase. Thus the chapter on joy exhorts us to listen to the last movement of Beethoven’s Ninth symphony as the music lifts Schiller’s somewhat prosaic poem Ode to Joy from the formal to the sublime. Spirituality is to be experiences wholistically rather than just talked about.

It is difficult to disagree with a psychoanalyst, for he will see all sorts of analytic reasons for your disagreement. Further he can identify any of a number of defence mechanisms preventing you from seeing what he sees, especially if he, like Vaillant, has made his name studying defence mechanisms. Even more telling, it is hard to disagree logically with someone who argues that spirituality is not about logic, but about the emotions and intuition.

Reason has to be included, otherwise a book, like Vaillant’s which argues his position cogently, would not be possible.

It is also a difficult book to critique because critical comments could be dismissed as ‘left brain reactions’. By contrast true spirituality is a limbic system positive emotion which those in the know, or those who are mature, understand. Those suffering from a surfeit of dogma, that is, those who are immature, will react against such an approach. This is the nub of the problem with this book, as with all books on spirituality. Those who are enlightened understand, whereas those who are not, will not, or cannot, understand. The problem is a Gnostic one.

Some of Vaillant’s positive emotions are better understood as more than emotions. Thus while hope, love and faith might have strong emotional components, and their exercise may light up certain limbic circuits, they, more properly, have been regarded as virtues rather than emotions. Love within a Judaeo-Christian framework is something commanded. As such, one of its dimensions is an act of will.

Spirituality is also regarded as a discipline. A good example of a less emotional spirituality is the polemic of another famous New Englander, John Greenleaf Whittier, a Quaker abolitionist. In his poem The Brewing of Soma culminating in what is now the hymn, Dear Lord and father of mankind, Whittier wrote against the mesmeric excitement of some of the Holy Rollers’ excesses and favoured a quiet reverent approach to the divine. We cannot easily separate the rational from the emotional, or even prefer one over the other. True spirituality seems to be a harmony of the whole person; will, emotion and reason, and not only within herself, but also in community.

Vaillant’s theological position reflects his Bostonian liberal Episcopalian stance. Faith in faith seems to be Vaillant’s exposition, although he does qualify it as faith in ‘the higher power’, ‘the universe’, or whatever. It does not matter what; it is faith that is important. However trust needs to be in someone or something worthy. Indeed Vaillant’s diatribe against fundamentalism would imply that who or what you have faith in is important, and it should not be in fundamentalism. This is of course the basic logical flaw in liberalism; they argue that you can believe anything, except illiberalism. Hence there are limits in what you can believe; hence you are not so liberal after all!

Vaillant accepts without argument that the virtues of faith, love, hope, joy, forgiveness, compassion, awe and mystical illumination are common to all religions. This would need some empirical verification, and probably on closer examination, this would be difficult to sustain. Like a range of mountains, religions may appear as one from a distance, but on coming closer they become distinct and different. Thus the eastern religions base their metaphysics on the cycles of death and rebirth rather than on a more linear western view of history as birth and death followed, in some religions only, by some form of after-life. The form of afterlife differs in different faiths. Further some forms of religions, from west as well as east, tend to be this-world-denying, in favour of the world of ideas or spirit, whereas other forms of religions are this-world-affirming, believing that the virtues of this life are important either now or in the next.

Further, while each religion may have these virtues to some degree, they may differ in the degree of emphasis they put on some rather than other of the virtues. Thus some religions are more warrior and honour-like; others more compassionate.

But more importantly, there are some missing properties in Vaillant’s list of aspects of spirituality. No spiritual system is complete without some comment on truth and on justice. These two properties, while not emotions, are essential for a complete spirituality. For instance there is no hope if there is no prospect of justice. Love is not love if it is not also based on truth. Yet both truth and justice could be regarded as left brain lexical qualities rather than passionate limbic ones. But then again one can have a passionate commitment to truth and justice. Once again, as we press the distinction between limbic and lexical we get into difficulties which would be solved by taking a more integrated approach.

The missing properties are of course the ones which do lend themselves more to controversy. Debates about truth and justice are centuries old, and they are important, even if they are controversial. These controversies will not go away by a bland love-in. Love is so important it must also based on truth. Hope must be based on justice. But this also highlights the differences between faiths. For instance Jewish thinkers have had some difficulty with Desmond Tutu’s Truth and Reconciliation commission. They see Tutu embracing mercy rather than justice, whereas to them, in some circumstances, justice demands no mercy.

Vaillant observes that exclusivity is a mark of spiritual immaturity, whereas spiritually mature people are usually inclusive. While there is a lot in what he says, this is a different maturity from a Biblical maturity, marked by a discernment of truth from falsehood (Eph 4:13).

Interestingly the context of that exposition of maturity is about a relationality and acceptance of difference, so maybe Vaillant and the Bible are not that different after all! However it does highlight a concern I have about the selectivity with which Vaillant welcomes sacred texts which agree with him but dismisses others which do not take his fancy. Such an approach tends to make his spirituality his own preference rather than the result of being informed by difficult texts, an avoidance of Scriptural discipline.

Grappling with sacred texts on the other hand is not just a lexical discipline, it is more wholistic because it forces you to face up to your biases, and your scotoma, and to analyse your rationalisations and reaction formations—defence mechanisms well expounded by Vaillant in one of his books on the subject. Maybe Biblical spirituality is not so purely cerebral after all!

These are fairly major caveats, but do they invalidate the work? Not at all. One of my alcoholic patients is a theologian, of considerable ability. He is at home with words, texts, explanations and tomes. Emotionally he was quite at sea, and found relief in alcohol. Vaillant’s book helped him to start to deal with his emotional responses and his basic limbic drives. He is becoming more wholistic and emotionally mature. He is discerning enough to deal with issues of immaturity, truth and justice and to benefit from all the emotionality that Vaillant had to offer. That is quite a compliment to the author; it helped a person to develop greater insight into himself.

Such a book is very valuable.