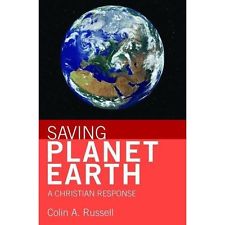 This is a recent addition to the many works by Christian academics and clerics urging care for the environment on the basis of biblical values and teaching. Colin Russell is a particularly distinguished scientist to become an author in the field, though he writes essentially as a layman, with little research evident outside of climate change.

Compared with other books in the genre this is helpful and positive, setting out yet again the problems and challenges viewed from a Christian perspective and anchored into biblical teaching.

However, the book is far from a comprehensive view of planet Earth as God’s creation, it focuses on the issues which comprise that well-worn abstraction: the Environment. He makes the point that ‘our environment is under threat’ and the writing continues in that vein. There is little to disagree with in what he says about pollution, wastes, climate change and so on, and still less in his exposition of the Earth being the Lord’s and us being accountable for care of it. The garden metaphor is paramount, with no mention of where food, fibre, energy and infrastructure come from or how they should be produced from planet Earth. A few simplistic comments, for example on oil tankers and GM foods, don’t help.

He then goes on to talk about the needs of the poor in a chapter which is sadly superficial. Beyond pointing again to adverse effects of pollution and land degradation, there is a total disconnect between this and the preceding chapters. Nowhere is a concept of stewardship of all God’s creation put forward, embracing land use, agriculture, forestry, mining and energy such that the needs of the world’s poor might actually be met. Planet Earth in fact includes the abundant resources God has provided to make third world poverty an avoidable obscenity, but there is no reference to this, let alone how Christians should mediate them or grapple with the manifestations of sin which prevent their proper use.

He includes a helpful reminder that needed changes such as that to counter climate change do not come easily: After years of public discourse Wilberforce’s bill outlawing slave trading by Brits was passed in 1807 but it wasn’t until 28 years later that the final abolition of slavery act was passed to implement the original intention.

He quotes William Temple approvingly that ‘Christianity is the most materialist of all religions’ (p. 92), but does not pick up the thought and apply it in any practical way, involving resources and energy for instance.

Maybe we need a moratorium on books by earnest Christians on the environment until a few broaden their scope to God’s whole creation, or at least the planet Earth part of it! There are big issues today needing the attention and values of Christians. Folksy and ‘feelgood’ homilies can help nurture a proper concern in the pews but don’t cut the mustard in pointing to answers where they are most needed.