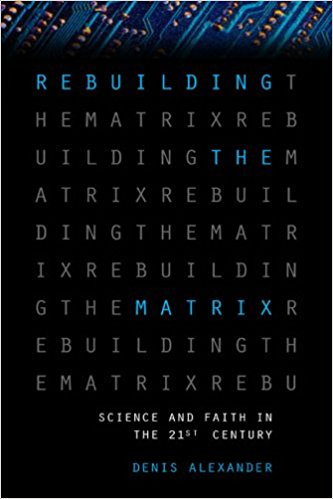 Rebuilding the Matrix: Science and Faith in the 21st Century

Denis Alexander will be well known to ISCAST members. He is an active biological scientist in Cambridge and Editor of the Christians in Science Journal Science and Christian Belief. His book is a tour de force which brings out logically and systematically the firm stand for a complementary view of Science and Faith that has been the clear message of the scientists of the Research Scientists Christian Fellowship (the forerunner of both Christians in Science in the UK and ISCAST in Australia) for some 50 years. Indeed one can hear clearly the echoes of many books written over this period by evangelical scientists from the RSCF stable: The Scientific Enterprise and Christian Faith by Malcolm Jeeves, Crosscurrents by Colin Russell, Christianity in a Mechanistic Universe and many others by Donald McKay and God and Evolution by Sam Berry. It is interesting to remind ourselves that well before the relatively recent explosion of interest in the Science Faith interface, the issues of the relationship between science and Christian faith were being debated by professional scientists, perhaps not with the theological depth that is presently apparent, but nevertheless with the stringency of hard scientific logic. This book is no exception. Perhaps rather more than its predecessors it is marked by its hard scientific logic, its exhaustive discussion of the issues and its extensive reference material, not only in regard to its bibliography, but also with respect to its extensive use of quotations in the arguments presented.

The intention of the book is clearly stated. After the first three chapters, which define the current concepts of science in the community and media, it goes on to indicate (p. 63):

that the remainder of this book will be committed to the argument that first, the paradigms concerning science and religion that are most often comfortably maintained in secularised societies are actually wrong; and second, that the use of the various transformations of science as ideological tools for either secularising or religious purposes represents an abuse of science.

It is concerned therefore to lay to rest the ‘conflict hypothesis’. About 60% of the content is concerned with the history of the science faith interaction, with the role of Christian scientists in the development of modern science and the consideration of the historical episodes of Galileo and Darwin etc. The remainder takes up the current issues of biology, evolution and evolutionary psychology, with final chapters on cosmology and ethical implications of science. In many respects for those familiar with the activities and publications of the RSCF and CiS, the arguments are very familiar. They are none the less cogent for that. The book is over 500 pages in length with no illustrations and fairly tightly packed, both by way of print and argument. It is therefore not something that one can read at a sitting. It is more in the character of a reference book, a dictionary of the complementary approach to science and Christian faith.

It does not consider the integration of science and religion—the development of a theology of nature—canvassed by Barbour, nor the consonance picture developed by Polkinghorne and therefore does not engage with present theological issues in the science faith debate.

For those wanting a brief interaction with science and religion as developed in some of the recent books of Polkinghorne or Peacocke or of the interface being explored currently by theologians this will be a disappointing book. For those however who would value a reference book that illustrates the development and apologetic issues of the science faith interface this will prove a valuable resource.

Allan John Day is Emeritus Professor of Physiology, the University of Melbourne, Australia, a Senior Academic Fellow, Ridley College, and a Fellow of ISCAST.