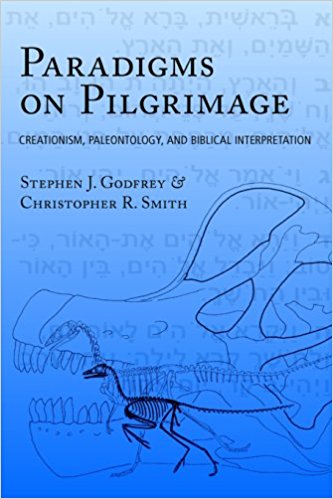 There are many books which usefully show how science and hermeneutics are complementary in learning about God and his world, most come from those who have worked out why and how this is so and present their conclusions. This book is fascinating because it follows the process of slowly- developing understanding in two people, both well-indoctrinated young-Earth creationists — one a palaeontologist and one a biblical scholar and pastor.

They eventually achieve a much fuller and more coherent understanding of what it means to believe in God as creator.

Both authors come from Christian communities where a living faith in Christ is inexorably bound up with a literalist view of Genesis 1, so that admitting the veracity of any scientific insight on origins is almost apostasy. But little by little the impossibility of giving credence to elements of the creationist position loosened that nexus. Purpose in creation was distinguished from process.

For Dr Godfrey, the fossil evidence became glaringly irreconcilable with the pontifications of flood-catastrophists, starting with fossil footprints and moving to how suites of organisms occurred together, evidently at different time to other suites. Successive paradigm shifts are well described.

Liberation comes as he understands that while the Bible teaches that ‘God sends the rains’, this has never been an impediment to scientific understanding of the hydrological cycle by Christians, and there appears to be no bogey of ‘atheistic meteorology’ promulgated in the US churches. Why should evolution be any more atheistic than meteorology? — or inimical to perceiving God as sovereign creator?

For Dr Smith, his work in literary studies and biblical studies led him to new understanding of the early part of Genesis and its literary conventions. He also explains how comparison of the creation accounts of Genesis 1 and 2 in Hebrew make it clear that promoting either as a chronological or scientific account does violence to the meaning. His realisation that the cosmology of Genesis is observational or phenomenological rather than objective underlines all this.

Following the personal accounts, Dr Smith deals with some questions raised in them. First, if the Bible is written in an observational mode which does not hold water scientifically, how can it be reliable in forming our understanding of God? And what are the implications of perceiving science and scripture as complementary, especially in relation to biological evolution? These chapters are useful in the book, but better expositions are to be found elsewhere.

A conclusion ‘Genesis cosmology and its implications’ in 15 pages goes through the Genesis 1 creation account drawing upon many relevant passages from the Bible and insights from elsewhere. The chapter finishes by drawing out implications for scientists and for students.

The book gently leads the reader from one side of the creationism dispute to the other at a level easily comprehensible by the kind of students likely to be hung up on such issues, and does so with a valuable balance of science and hermeneutics. Personally I would have liked to see a little more pushing of epistemology bridging the gap. But it will be a good book to have on campuses and in churches with intelligent readers.