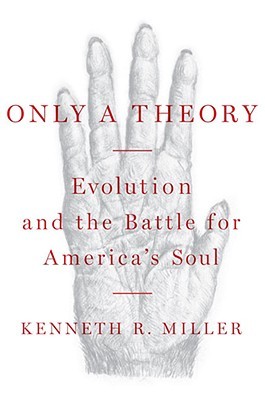 Review of Ken Miller’s book ‘Only a Theory: Evolution and the Battle for America’s Soul‘
Alan Gijsbers, June 2010.
Download PDF

Only a theory: Evolution and the battle for America’s soul

This is a valuable book, and my criticisms are not meant to denigrate its strengths. As a biologist Ken Miller very effectively shows the bankruptcy of the science of Intelligent Design (ID). He very effectively shows that the bacterial flagellum is not irreducibly complex, nor is the clotting cascade, nor the immune system. These arguments convinced the Kansas courts not to grant ID the status of a science. In reality it is a religious position, and as such, ineligible in the secular classrooms of the United States.

He also shows that ID as a movement has not delivered on the scientific promises that it made ten years ago. The scientific shortcomings of ID as a scientific movement have been named and are increasingly becoming more embarrassing for that movement. It confirms a prediction I made a few years ago that, as a science, it is a sterile theory. Further Miller very effectively demonstrates new scientific evidence from genetics which strengthens support for the theory of evolution.

Miller further exposes the Wedge Strategy developed by lawyer Phillip Johnston and the ID movement, whereby they hope to overthrow atheistic materialism as the underlying metaphysic of biology and replace it with a theistic science. I have considerable sympathy for understanding science within its metaphysical context, but I find myself at odds with the political tactics ID employs, even though those tactics have persuaded a considerable proportion of the American public. The Wedge tactics address the peculiarities of the American scene, with its strong separation of the world of faith and the world of science, and have tried to establish a more Christian metaphysic in a secular world. The legal battles have actually and unfortunately strengthened that artificial separation of science from its metaphysical underpinnings. I would prefer to see the metaphysics being taught as part of a more comprehensive understanding of the nature of science, both its roots and its future, but to have done so in a much more charitable and less belligerent way, and in a way acceptable within secular culture.

This book however shows Miller’s weakness in the history and philosophy of science. He wrongly claims that science arose out of the Enlightenment, thereby ignoring the earlier contributions to development of science from Islam, the Renaissance, and the Reformation, and in particular the theistic roots of modern science. He further romanticises the scientific enterprise as an apolitical movement of reason. He ignores the pursuit of divine design which drove Johannes Keppler to develop his laws of planetary motion, the ecclesiastical politics surrounding Galileo’s ideas and Newton’s belief that the hand of God kept planetary motion going. Nearer today, and within the gamut of the biological science of evolution, Arthur Koestler’s Case of the Midwife Toad, tells the sorry story of Paul Kammerer’s suicide as a result of the politics surrounding his defence of Lamarckian as opposed to Darwinian evolution. The story of Semmelweis, again tells the story of the political nature of the resistance to accepting a new scientific theory. The rise and fall of scientific theories is tied in with the messy politics within science.

More fundamentally there is an unthinking US jingoism underlying the book. This is necessary because Miller’s attempt to persuade his opponents is an attempt to maintain the US as the Preeminent Scientific Nation. It is a battle for the American Scientific Soul. Further he labels the ID strategy as a strategy of the post-modern liberal left who question the rationality and objectivity of science. While that might be a good tactic against the religious right who actually back ID, it does leave his philosophy of science somewhat thin.

Further he takes pride in the fact that American democracy means that every person has the right to an opinion, whether that person is an ignorant redneck or a professor of biology from Oxford. And the jury to decide which opinion prevails is the opinion of the masses, who will decide who will be on the education boards and therefore who will dictate what schools will teach. Truth is entirely determined by the democratic process! As someone wisely remarked, if Moses had waited for a democratic consensus, the Israelites would still be in Egypt! Ironically Miller’s legal win was persuading a learned judge. Chances are that if he has tried to persuade twelve good Kansas people, he may have lost the battle, just as the Scopes trial was initially lost.

One of the strands that justifies evolution in Miller’s mind is the glory of free enterprise. This book was written too soon, before the great crash of 2008. This crash illustrates how Wall Street’s unbridled greed brought the world to its financial knees, and exposed the weakness of a pure market economy. Survival of the fittest might be the economic theory which inspired Darwin to look for its biological equivalent, but unchecked it leads to the fiscal excesses of the late 2000’s. While it might be a good argument if you are trying to persuade Americans pre-2008, now it looks rather thin.

The other main problem with this book is that it ignores the way evolution has been used to ‘ prove’ atheism. Indeed the index contains neither an entry to ‘ atheism’ nor an entry to atheism’s main scientific guru, Richard Dawkins. Miller does not mention the unthinking collusion between Dawkins and Creationism which unnecessarily pitches evolution against religion and the Bible against science. Further Miller does not discuss the broader issues raised by evolutionism which has led to all sorts of excesses like the Nazi experiments of the 1930s.

In sum, biologically this is an excellent defence of orthodox science against the rather thin views of ID, but its history and philosophy of science is quite threadbare, and it is rather thin on the excesses of evolutionism as a metaphysic. Nevertheless a worthwhile book with a lot of good biology in it.