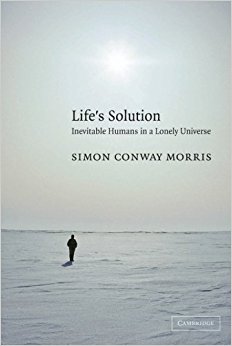 This book is written by a Professor of Evolutionary Biology who is also a convinced evangelical Christian. Page after page of intriguing scientific facts are built together to support Conway Morris’s central thesis. He suggests that, if we were to examine the evolutionary process on an imaginary earth-like planet, Threga IX, situated far away from us, possibly in another galaxy, we would probably find beings very much like us living there. This is in direct contrast to the belief of Stephen Jay Gould, who proposed that living beings on Threga IX would be very different from us.

Conway Morris presents a book full of examples of how various organisms have developed the same properties independently, often in different isolated locations. The organisms were not similar because they were in the same evolutionary tree (phylogenetically related) but because the very structure of the Universe led them to evolve along similar paths to similar results.

Another device used by Conway Morris is to imagine the ‘hyperspace’ consisting of all possible combinations of the 20 amino acids which might make up a protein with 100 amino acid building blocks. There are 10020 combinations. Even if we were to reduce this number by a factor of 1012 in order to prescribe that the proteins would be capable of enzyme action the number remains unimaginably large. However in our world only a very small fraction of these possible proteins actually occur – the hyperspace is ‘very sparsely sampled’. Conway Morris extends the hyperspace idea to include organism characteristics and societal organisation and finds again ‘the howling wildernesses of the maladaptive, the 99.9% recurring of biological space where things don’t work, the Empty Quarters of biological non-existence’. Although many different structures may have been tried in

nature, most of them don’t work and nature independently evolves in different places similar structures which do work. This is the idea of convergence. Somehow life is able to navigate through this hyperspace to similar solutions. For example it is not only spiders which produce silken threads. We also have the silk moth, the fungus gnat (glow-worm), midges, caddis flies and the weaver ant. Independently these organisms have converged on the idea of silk production for various purposes.

Likewise we find cacti with similar stem cross-sections have evolved independently in Mexico and in Africa.

The uniqueness of DNA might also be considered. Might life on Threga IX be founded on a different combination of bases? Could we have the sugar threose substituted for ribose in the DNA (which stands for deoxyribose nucleic acid)? Indeed this can be done, but only in a special laboratory situation, quite different from what is likely to be encountered in the early development of a planet. DNA seems to be the only structure likely to work.

Darwin regarded the flowering plants as an ‘abominable mystery’. Their evolutionary origins are still uncertain. Conway Morris’s language is usually tentative as he says ‘So we might speculate that not only does Threga IX have plants and flowers, but perhaps something not so different from a bird pollinating a flower’.

Sometimes convergence arises through the use of a similar protein such as rhodopsin, which is used for seeing both in our own eyes and also in the ‘eye-spots’ in the single celled chlamydomonas. On the other hand rhodopsin is used for a different purpose in some bacteria, to drive a ‘proton pump’, part of the cell’s energy system to synthesise ATP. This sort of finding is significant as we contemplate evolutionary processes.

Conway Morris takes us on a journey to examine many different life forms. We meet the fascinating mormyrid or elephant-nose fish, which can generate and receive electrical signals and which has evolved a remarkably large cerebellum. It needs the larger brain to separate out desired signals from the ‘electrical cacophony’ which it encounters. Then there is the star-nosed mole which uses its very sensitive nose to ‘see’ underground. Conway Morris suggests that the nervous systems supporting such various detection mechanisms are rather similar and that ET on Threga IX may have similar mental processes – all because evolutionary forces have found what works best and have given rise to convergence.

New Zealand is suggested as an isolated location ‘as close as we can get to studying life on another planet’. The flightless birds, the kakapo, moa and kiwi, reached flightlessness convergently. Conway Morris shows his sense of humour as he opines that the extinction of the moa ‘was almost certainly by way of the stew-pots, roasts and fricassees of the Maoris’.

The thesis of the book is similar to that of Richard Colling in his book Random Designer: Created from Chaos to connect with Creator (Browning Press, 2004). God has set up the universe so that we humans will inevitably evolve without necessitating any other divine intervention. So many examples of convergence are heaped up, that one must be convinced that it is a widespread process. From a scientific point of view the idea has fairly wide support. For example Richard Dawkins says:

We shall see that ‘the’ eye, legendarily difficult though its evolution sometimes seems, has actually evolved at least forty and probably sixty times independently all around the animal kingdom.

The reader might now want to ask ‘Where is God in all of this?’. Are we left with a deistic God who created our universe with all its basic physical constants and then left it alone to evolve? This is a very basic question in the Science-Christianity discussion. The scientist, qua scientist, operates on the basis of the laws of physics being the same at all times and all places and leaves no room for supernatural interferences.

Intelligent Design advocates suggest that some features found in nature are so complex that a ‘Designer’ must have stepped in to bring them into being. The danger with this idea is that there is always the possibility, maybe even probability, that some scientist will come along with a perfectly good scientific explanation of how the complex organism might have arisen, and then the need for a ‘Designer’ disappears.

The scriptures may be interpreted as saying that Jesus himself holds all the scientific forces in place, constantly, at all times.

The Son is the radiance of God’s glory and the exact representation of his being, sustaining all things by his powerful word

and ‘in him all things hold together’ (Col 1:17 NIV). The idea is that these same forces acting on the basic building blocks of the Universe, protons, electrons, photons etc, inevitably give rise to a world very like our own.

From a theological point of view it should not matter to us how God created the universe since, as Paul Davies has pointed out (Davies, 1992,

p. 42), God’s activities in creating and sustaining can be seen as one and the same.

Graham O’Brien (O’Brien 2007) sees the convergence idea as helpful in that it demonstrates the purposefulness of God in creation. Referring back to Karl Barth’s concept of election, he suggests that, before the creation event, God chose to bring into being a universe which inevitably produces a ‘creature that can respond to God in covenantal fellowship’. He contrasts this teleological view with the teleonomical view of writers such as Peters and Hewlett who:

propose that nature is devoid of inherent purpose, suggesting that purpose is assigned to it by God.

The difference here is important. Conway Morris asserts that purpose may be discovered in nature scientifically while the other writers can only postulate a purpose by theological means.

The book is densely packed with scientific information, yet everything is explained so that a person, such as the writer of this review who is not biologically trained, can still understand all the arguments. As a scientist I prefer the idea that God set up the Universe in such a way that we humans would inevitably arrive on the scene. The alternative of requiring God to stick his fingers in to alter the natural course of events is more problematic for a scientist.

Of the 445 pages in the book, 112 are endnotes. It is very completely referenced.

Associate Professor Robert Stening is a Senior Research Fellow in the School of Physics, University of New South Wales.