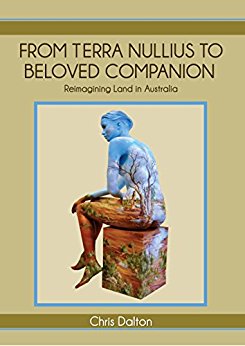 Book Review – From Terra Nullius to Beloved Companion: Reimagining Land in Australia, by Chris Dalton, 2017, InHouse Publishing, 320 pages. More information about the book is available at the author’s website here and here.

Ian Hore-Lacy is Director for Public Communications with the World Nuclear Association and is a Fellow of ISCAST.

This book expresses a faith perspective and worldview that properly rejects a purely utilitarian view of the land and its resources. “At its core is the emergence of a passionate love of Land and the adoption of a transdisciplinary, multiterranean approach.” It tunes in to Tim Winton helpfully. (xiv, 280)

Dalton wants to apply theology to public policy and outlines “an open-ended, interrogative approach that appeals to imagination, a readiness to listen to the voice of the Land, and a recognition of the myth of policy neutrality,” notably in relation to coal seam gas (CSG). “It has its origins in liberation theology, with an orientation towards seeking justice for the land” (xv). The author acknowledges his panentheist position in terms of God being radically immanent in the world (178), and affirms the need to treat land as a part of creation that is sacred in itself.

In my view, Dalton too readily dismisses stewardship as an adequate theological concept, and incredibly fails to address the global question of two-thirds of the world’s population having a pressing need for the natural resources that we intellectualise about and which have been provided in abundance by a gracious God, thereby implying that he dismisses that concern along with any utilitarian view of resources (e.g., Deut 8:9). In that regard the book is part of an academic genre which is profoundly unhelpful and verges on misanthropic in a world full of practical problems, though it is more thoughtful than many others. The Lausanne Movement’s Cape Town Commitment of 2011 would have provided some balance.

In discussing his “evolving theological treatment of the land” Dalton leans heavily on Walter Brueggemann, and also on Steven Bouma-Prediger, and Michael Northcott. Like these he reacts against the merely utilitarian view of land and resources without addressing the question of what might be God’s intentions. Are the abundant natural resources a generous creator has provided physically and through technology to be spurned or perhaps merely admired?  Chapters 11 to 18 on public theology of land are lacking any directly biblical material. Geoff Lilburne is quoted with a Christological perspective.

Dalton’s conclusion is the following assertion (from the Preface):

the voice of the Land can be heard through Australian landscape art, poetry, experience, community input into the policy debate, spirituality, and a plethora of government inquiries and reports. It is summarised by quoting from Rainbow Spirit Theology: “The land cries: ‘My God! My God! Why have you forsaken me? The cry of the land is the cry of Christ, echoing through the ages, as Christ continues to suffer with us and for us.’” (xvii)

These chapters (11–18) follow several (6–10) on contentious CSG policy and practice federally, in Queensland and in NSW, but not Victoria – the Reith report to Victorian parliament is not mentioned. These chapters are very informative and interesting, and certainly make the point that much more than economic considerations need to apply. The concerns raised permeate what follows.

CSG as a “wicked problem” provides context for the “theology” chapters where Dalton describes his evolution of thought from agreeing with policies balancing resource extraction and environmental considerations (ecologically sustainable development) to one of reacting against the anthropocentrism built in to such policies. According to Dalton, land itself needs to be a stakeholder, requiring a change in perspective to hear “the voice of the Land.” Accordingly, he sets out to “use theology to analyse our relationship with Land in Australia” (157). He moved “from seeing the land as a ‘gift from God’, through recognizing Land first as ‘neighbour’ and then as ‘companion’, to describing Land as ‘beloved’.”

After seven pages on Old Testament and New Testament foundations as perceived by a few authors, bringing in Tom Wright on “radical healing” of the land, we then leap into Gaia (enhanced by faith insights) and the need for “placing Land within the context of God’s cosmic economy of salvation.” The following 40 pages have some valuable discussion drawing upon different authors, and finish with the idea of land as a gift. But there isn’t much theology evident in the diverse views and insights quoted; panentheism and new age spirituality set the tone.

This brings Dalton to assert that it is “in the liminal space … beyond pragmatic atheism (which dominates public policy) but not as far as the eschatological new creation, that public theology has a contribution to make” (214)—public theology being informed by evolving theology of land. Chapter 18 usefully describes how this public theology might get traction today.

There are numerous references to Wilberforce and the abolition of slavery as the epitome of a paradigm shift such as Dalton sees as being required regarding land. Slavery today is repugnant, so why is the treatment of land as property not similarly repugnant? (268) “It is incongruous that a company, which is a human construct, has a legal identity and more rights (e.g., to own property such as land) than Land, which is a divine creation.” Hence Dalton’s mission to move land from exploited resource to beloved companion, with its own legal rights.