Past Issues, Uncategorized
17 Feb 2009
Tagged Science & Christianity, The Human Being 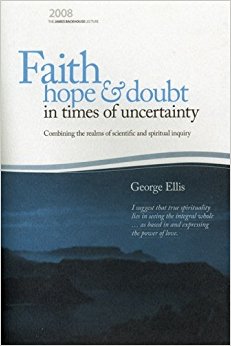 ‘Faith Hope and Doubt in times of uncertainty: combining the realms of scientific and spiritual inquiry’

Copies of the lecture in booklet form are available from ISCAST (vic@iscast.org.au) at $11.00 plus postage and handling.

It was a privilege to attend the Quaker Backhouse lecture in 2008. I felt that if Elizabeth Fry and William Wilberforce could constructively meet, then why not ISCAST and the Quakers? It was strange being in a room full of people interested in faith and barely knowing a soul there, but Ian Harper and I were made very welcome and we appreciated the silent worship before and after the lecture.

The proceedings have been published as the booklet currently being reviewed which is vintage George Ellis. Initially identifying a number of possible areas of conflict between science and religious faith, he dismisses some and concentrates particularly on reductionism and its weakness in addressing the complexity of humans and society.

In dealing with complexity he expounds again one of his favourite themes that of top-down as well as bottom-up causation. He also challenges rationalism which ignores large areas of human thinking and behaviour including intuition, emotions, imagination and the way these express a person’s goals and values. His neuroscientific model is well worth reflecting on and the lecture modifies the model in the book by adding in the influence of society on the individual’s values, his aspirations and his secondary emotions.

He then discusses the limits of science and how it cannot address metaphysical issues, ethics, transcendence and aesthetics. He finishes with one of his major themes: that of kenosis or self-emptying love.

ISCASTians who attended the COSAC conference in Canberra in 2005 will be familiar with that theme. It expresses the wonder of an all-powerful God who creates space for God’s creation and in the coming of Christ, his life and his death, showed the depth of God’s love towards broken humankind.

It is a powerful theme, ironically about powerlessness, which has affected a number of key science-faith thinkers including Polkinghorne, Barbour, Peacock, Moltmann and Jeeves (Polkinghorne 2001). George’s theme at COSAC 2005 inspired me to send him a prayer about kenosis. I was honoured to have him finish his lecture with that prayer, before he played a wonderful song, ‘Precious Lord take my hand’ by the Pro Cantu Youth Choir, and finished in silence.