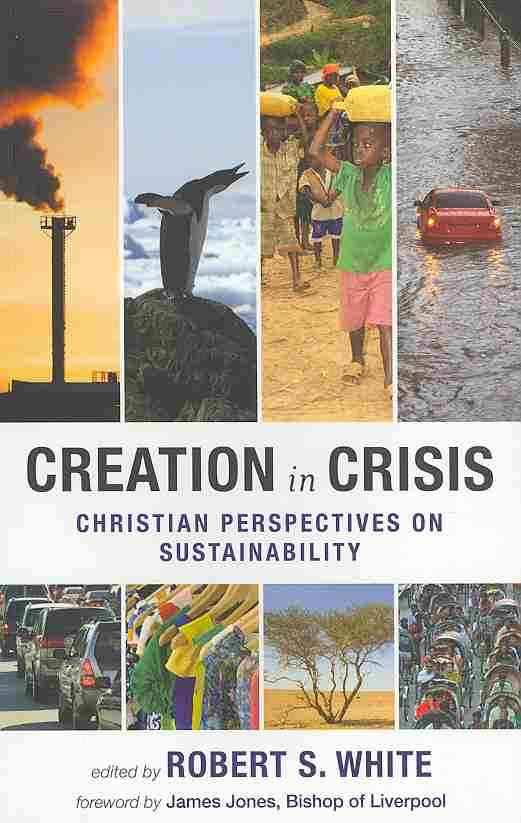 This book provides some well-informed and thoughtful perspectives on how sustainably humanity is living on the Earth that is our finite home. Its 18 authors cover climate, natural disasters, water, food, agriculture and poverty, as well as economics, governance, and population control, before finishing with five chapters on ethical and biblical perspectives. Forestry and minerals are effectively omitted, while energy is confined to a few thoughtful pages by Sir John Houghton. These could have been greatly amplified.

While there is much food for thought in most of it, like many such books this comes from a sort of parallel universe of academics who tend to be disconnected from the people and constraints which shape the real world

— the one which puts food in our supermarkets, fuel in our cars, electricity in our homes, and public transport at our disposal.

Despite some very good content from erudite authors, it does not establish that Creation is in Crisis, as distinct from facing many challenges. Like so much else of this genre in print, it does not take into account many resource and energy issues, or (apart from a couple of chapters) seriously grapple with meeting the needs of 6.5 billion people — though the subtitle would appear to have all of them in mind. It’s largely from the academic sidelines of life. Only one of the 18 distinguished contributors seems to have operated vocationally in addressing the issues it talks about.

Bob White’s introductory chapter is very good, though a little over-egged, but it provides a sound perspective on the diverse contributions. His leading sentence however:

is oft-stated but never justified, and underlines the very shortcomings of the book. Where precisely are the limits of resources?

Along with minerals and energy, food is obviously central to sustainability. In the two chapters on food and agriculture, one author’s urging a return to agrarianism is breathtaking in its unreality (at least for two thirds of us), though this is followed by a more realistic treatment focused on ecosystem services and human institutions. The latter author, Calvin DeWitt, concludes fleetingly on a hopeful note that:

agriculture respectful of ecosystem services [may be] sufficient for meeting world needs.

It would be a lot more convincing for me to see some discussion of how Norman Borlaug’s influence was life- and nation-changing in India but unsuccessful in Africa, or similar experience.

Academic people obviously have a valuable — indeed indispensable — role in assembling and analysing data, then articulating ideas for the rest of us to feast upon. But in their critique, as here, they sometimes show very little understanding of the resources and processes which create the economic wealth on which they themselves depend, and which are actually fundamental to addressing the issues. Hence their words contribute little that is new or practical beyond such broad ideas as decarbonising energy, making agriculture and forestry sustainable, and avoiding pollution, though their analysis is certainly challenging and constructive in this limited sense.

It is not clear if the book is meant to be credible only to the academic and clerical readers, or also to the people who are best placed actually to do something about the challenges. There are some uselessly negative inclusions if the hope is to capture the attention of those who can act — Padilla’s selective diatribe against multinational companies is the most obvious. The book is likely to be dismissed by those outside its own club.

So much that is fundamental to our stewardship of God’s creation, the Earth, is invisible to almost everyone in our urbanised culture. This is reflected in the book. It is also incidentally reflected in our readiness to talk about ‘the environment’ — a selective abstraction which includes little more than a bucolic awareness of food production among all that we depend upon from among God’s bountiful resource provision. Mining, forestry and energy production are conveniently invisible unless something like the Gulf of Mexico oil spill is in the news. Even then the focus is blame, and not the magnitude of the technological task driven by our consumer demand.

I imagine that if Bob White tried to find some thinkers from finance and industry to share in the preparatory discourse he may have found no takers. Or maybe he had reason to feel that such input would be intrinsically myopic or incompetent. Either way, it raises the further question of what the churches are doing to foster the maturity of articulate talent in their ranks but outside the clerical-academic axis. It is not just a question of theological education for laity, though that would help.

The chapter on water is a highlight, and one on agriculture also thought- provoking, if also inviting some scepticism of data used. I guess for me the scepticism is wider — I don’t buy too much of the crisis and ‘ecological collapse’ language. But the book is framed thus and some contributions are predictable and less than convincing.

While sharing Rene Padilla’s and Michael Northcott’s aversion to consumerism, I diverge diametrically from the former’s caricature of economic systems and representation of the real problems of poverty (mainly wicked multinational companies). This raises (as do a couple of authors in passing) the question of property rights and associated social and legal infrastructure in developing countries as a constraint on emerging from poverty. It would be good to have a chapter by Hernando de Soto alongside Padilla’s, the two having similar acquaintance with the problems.

Later in the book there is a welcome emphasis on the kingdom of God involving the renewal of creation and therefore its active and intelligent stewardship meanwhile. How much can be achieved without the eschatological ‘transformation in human values’ is implicitly called into question though. Apart from a little by Northcott (sourcing it in colonialism) there is a surprising lack of comment about consumerism here. A more practical note is struck earlier by Sir Brain Heap et al. in pointing to the human ‘ability to cooperate’ and thereby achieve much in a transnational context. It’s a question of what values need to be transformed in the West, in Africa, in the Middle East, in south Asia and in east Asia — and how that is achieved in each region.

One thing missing from the book, notably this last section, is any perspective on how abundant is God’s provision on this planet. Yet that is a principal parameter of considering sustainability. Perhaps that is because there is also so little on how actually to get past the immediate challenges which are the substance of the book.

Whether from academic-clerical or any other perspective on sustainability, these challenges are considerable and the book shines some very helpful light on them. But where are the mining, energy, transport, manufacturing, and economic inputs to the discussion from the practical investing, engineering and wealth-creation side of the picture? Not only could they shed more light, but also more usefully point the ways forward. A book like this tends to deepen the perception that the academic-clerical realm is an intellectual playground divorced from the real world, which is unfair to most of those in it.

Certainly western Christians cannot rest or be complacent while two thirds of the world’s people have insufficient food, health, potable water, housing and physical infrastructure, even if we conveniently forget that many are our brethren.

Review by Ian Hore-Lacy who is Director for Public Communications with the World Nuclear Association, based in London, and is a Fellow of ISCAST.