Unlikely Allies: Monotheism and the Rise of Natural Science 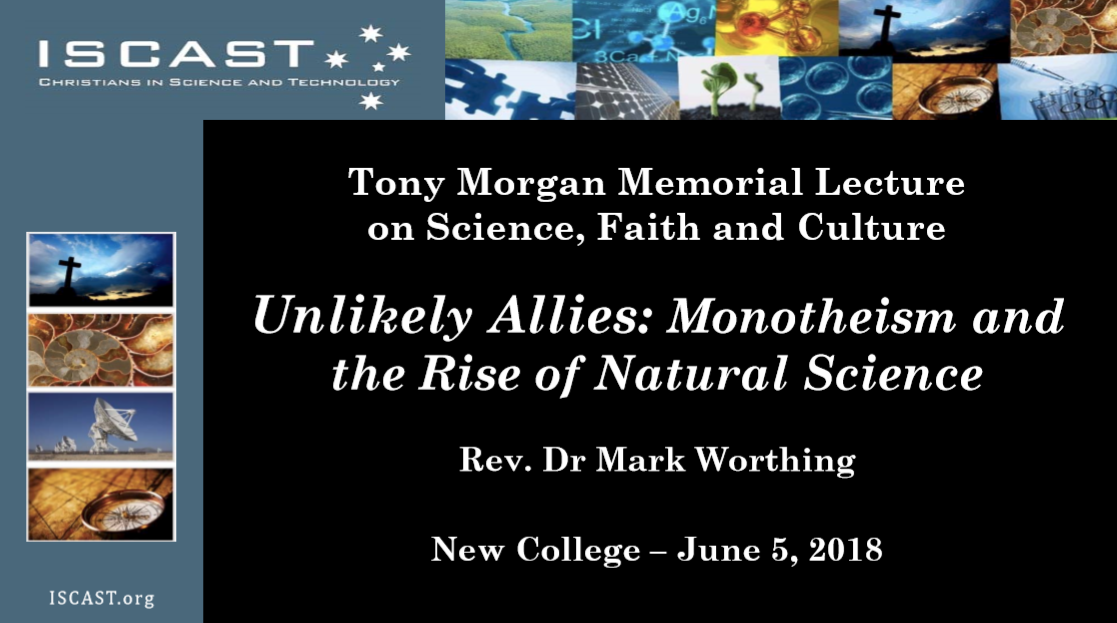 A short eulogy to Tony Morgan, a major benefactor of ISCAST, was given by Rev. Dr Chris Mulherin, the ISCAST Executive Director, before the lecture.

Audio mp3 files of Rev. Dr Chris Mulherin’s eulogy to Tony Morgan, Rev. Dr Mark Worthing’s lecture and the Q & A session following it, and pdf copies of his PowerPoint slides are available for downloading now. (N.B., to save mp3 files to your computer, use right-click and choose ‘Save link as…’).

Abstract:  In ‘Unlikely Allies: Monotheism and Origins of Natural Science,’ Mark Worthing examines the many claims by various religious communities that their tradition played a unique role in the rise of the natural sciences. After a brief survey of these claims, and an examination of the objections to them, he argues that monotheism in general, more than any particular manifestation of it, played a significant role in the rise of modern science. The case for monotheism’s positive role in the development of science is not based alone on the historical and geographic proximity of epochs of growth in the natural sciences and strong monotheistic intellectual communities. It is also based on the explanatory value of certain key features of monotheism which provided fertile conditions for the rise and growth of the natural sciences. Dr Worthing further argues that Christianity, while not alone responsible for producing these conditions, played an especially strong role in the rise of science in the modern era. He suggests that certain unique features of Christian monotheism elevated the view of the natural world and may explain, in part, the rapid growth of science in the seventeenth, eighteenth and nineteenth centuries. Given these historical links, the view that religion, especially monotheistic religion, is the natural enemy of science, must be rejected. Contrary to popular perception, belief in one God and the natural sciences have been unlikely allies for over two millennia. 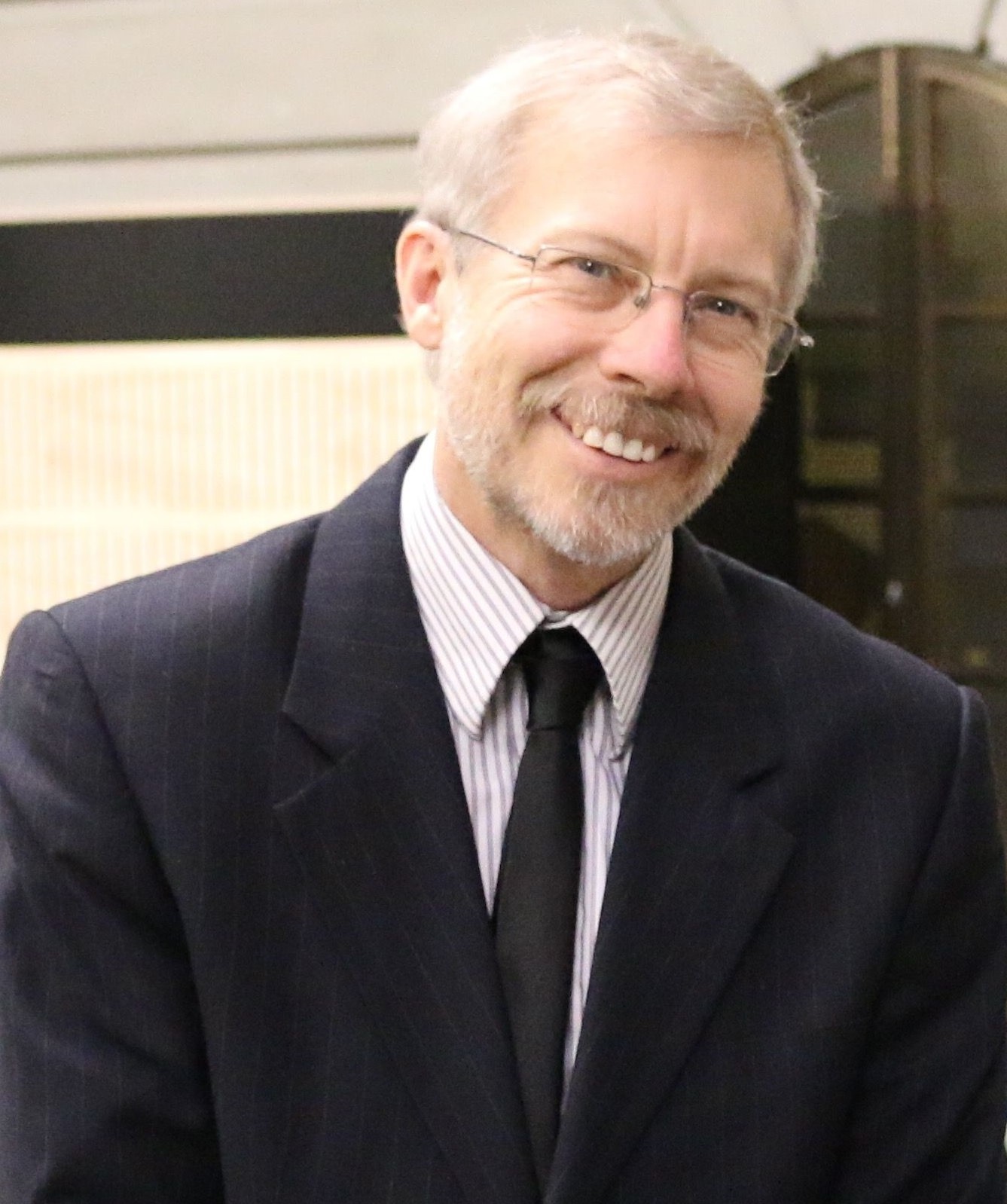 Biosketch: Mark Worthing holds a Dr.phil. in the history and philosophy of science from the University of Regensburg, Germany, and a Dr.theol. in foundational and ecumenical theology from the University of Munich.  He is currently the pastor of Immanuel Lutheran Church, North Adelaide. He was formerly Senior Researcher at the Australian Lutheran Institute for Theology and Ethics (ALITE) (2013-2015) and Senior Research Fellow of the Graeme Clark Research Institute at Tabor College, Adelaide (2010-2012. He is currently an adjunct lecturer and thesis supervisor at Flinder’s University.

His recent publications include Martin Luther: A Wild Boar in the Lord’s Vineyard (Morning Star, 2017); Narnia, Middle-Earth and the Kingdom of God (Stone Table Books, 2016); Graeme Clark. The Man Who Invented the Bionic Ear (Allen&Unwin, 2015); and God and Science in Classroom and Pulpit, with G. Buxton and C. Mulherin (Mosaic Press 2012). His book God, Creation and Contemporary Physics (Fortress Press), won the international 1997 Templeton Prize for science and faith book of the year.

Mark is a Fellow of the Institute for the Study of Christianity in an Age of Science and Technology (ISCAST; http://iscast.org), and is a founding member of the International Society of Science and Religion (ISSR).

Opinion
Can a psychological theory help us understand how we relate to God?
Opinion
Christians and Creation Care: Why Bother?
Opinion
Technology can now ‘enhance’ humanity: Should Christians be on board?
Opinion
Are we slaves to our genes?
Opinion
Why the six-day creation story is not what you might think
Opinion
Why following God’s call might mean care for … insects
Opinion
Getting Old: What Shall Christians Think?
Opinion, Reviews
Alan Gijsbers responds to Peter Stork’s “Wisdom as Interdisciplinary Space for Science and Theology”
Opinion
What the IPCC Report Means for Australia
Opinion
Consciousness and the Limitations of Science
Opinion
Wisdom as Interdisciplinary Space for Science and Theology
Opinion
Why Don’t Christians Want to Talk About Evolution?
Opinion
Biosecurity: Can Safety become the Enemy of Humanity? A “Theology and Science” exploration.
Opinion
Strange Bedfellows? Orthodox Theology and Science
Opinion
Model embryos: Praising heroes, damning villains, or thoughtful conversation? Reflections on iBlastoids and the discourse of science, ethics and religion
Opinion
Science and Orthodoxy Around the World