Review of "Unsettled: What Climate Science Tells Us, What It Doesn't, and Why It Matters" by Steven E. Koonin | ISCAST – Christianity. Science. In conversation

Review of “Unsettled: What Climate Science Tells Us, What It Doesn’t, and Why It Matters” by Steven E. Koonin 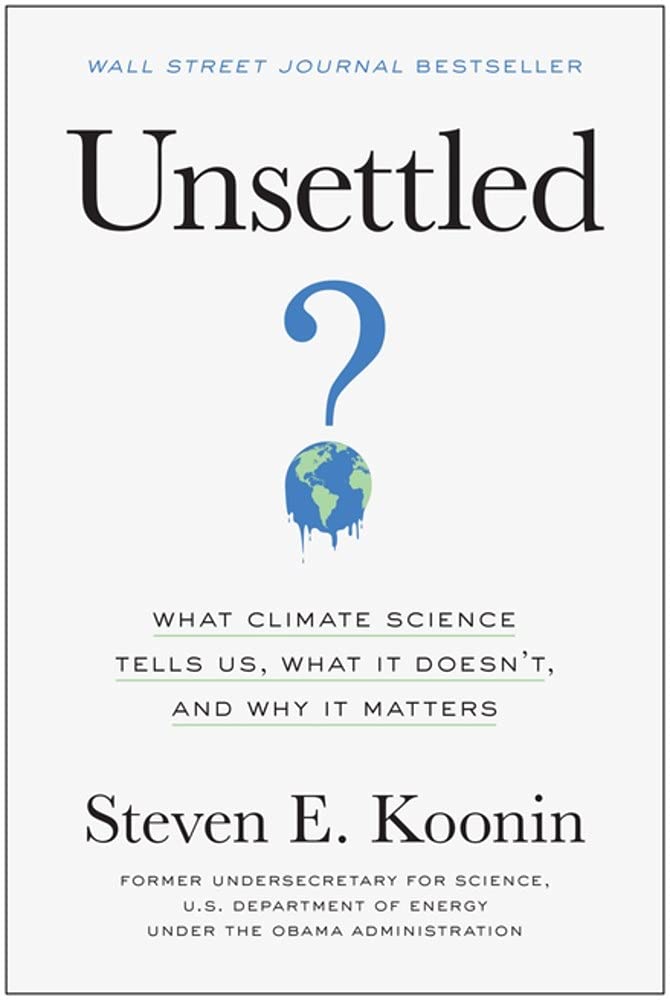 Review of Unsettled: What Climate Science Tells Us, What It Doesn’t, and Why It Matters by Steven E. Koonin, BenBella Books, 2021. 258 pp + 45 pp notes & detailed index.
Reviewed by Ian Hore-Lacy, July 2021
Ian Hore-Lacy is the Senior Advisor of the World Nuclear Association and a fellow of ISCAST. Since 1995 Ian has been occupied monitoring what is going on with nuclear energy worldwide and writing it up for lay readership.

In a sense the title and strapline says it all! This is a book stressing the importance of rigorous and ethical science which is scrutinised and challenged rather than being allowed to furbish a narrative of “The Science” of climate which gets a life of its own, supposedly ‘settled’ beyond serious question. It is about the importance of scientific integrity in grappling with complexity to enable faithful stewardship of God’s wonderful creation. For me, the book resonates with Psalm 5, where the scientist bows down “in reverential awe”, despite there being “nothing reliable in what [some peers] say”.

Scientific American published two critical opinion pieces on this book, one saying that Koonin “cherry-picks and misrepresents outdated material to downplay the seriousness of the climate crisis,” the other saying that he “falsely suggests that we don’t understand the risks enough to take action.” Another from Yale said that ‘settled science’ is a straw man. The journal refused to publish his rebuttal to the first opinion piece.  Koonin then blogged that “Scientific American has published a criticism of me and my recent book, Unsettled. Most of that article’s 1,000 words are scurrilous ad hominem and guilt-by-association aspersions from the twelve co-authors. Only three scientific criticisms are buried within their spluttering.” He then responds convincingly to those three, suggesting that the critics don’t seem to have actually read his book. The tone and substance of the critiques seem to me to justify Koonin’s book, and doubtless are only the first of what will be many. Hopefully the tone will moderate so that we see science at work as methodology rather than ideology.

Reviews
“Can a Scientist Believe in Miracles? An MIT Professor Answers Questions on God and Science” by Ian Hutchinson
Reviews
“The Nature of Things: Rediscovering the Spiritual in God’s Creation”
Reviews
“Blind Evolution? The Nature of Humanity and the Origin of Life” by David Frost
Reviews
“Why We Disagree About Climate Change: Understanding Controversy, Inaction and Opportunity” by Mike Hulme
Reviews
“Death Before the Fall: Biblical Literalism and the Problem of Animal Suffering” by Ronald E. Osborn
Reviews
“Ethical Basics for the Caring Professions: Knowledge and Skills for Thoughtful Practice” by Graeme McLean
Reviews
“Science, Religion, and the Protestant Tradition: Retracing the Origins of Conflict” by James Ungureanu
Reviews
“Galileo Goes to Jail: And Other Myths about Science and Religion” by Ronald L. Numbers (ed.)
Reviews
“Transhumanism and the Image of God” by Jacob Shatzer
Opinion, Reviews
Alan Gijsbers responds to Peter Stork’s “Wisdom as Interdisciplinary Space for Science and Theology”
Reviews
“Thinking through Creation: Genesis 1 and 2 as Tools of Cultural Critique” by Christopher Watkin
Reviews
Review of “Climate Change: The Facts 2020” by Jennifer Marohasy
Reviews
Review of “The Bible & Ancient Science: Principles of Interpretation” by Denis O. Lamoureux
Past Issues, Reviews
Review of “The Faraday Papers”
Reviews
Review of “The Lost World of the Flood: Mythology, Theology and the Deluge Debate” by Longman and Walton
Reviews
Review of “The Genealogical Adam and Eve: The Surprising Science of Universal Ancestry” by S. Joshua Swamidass