Review of “Climate Change: The Facts 2020” by Jennifer Marohasy 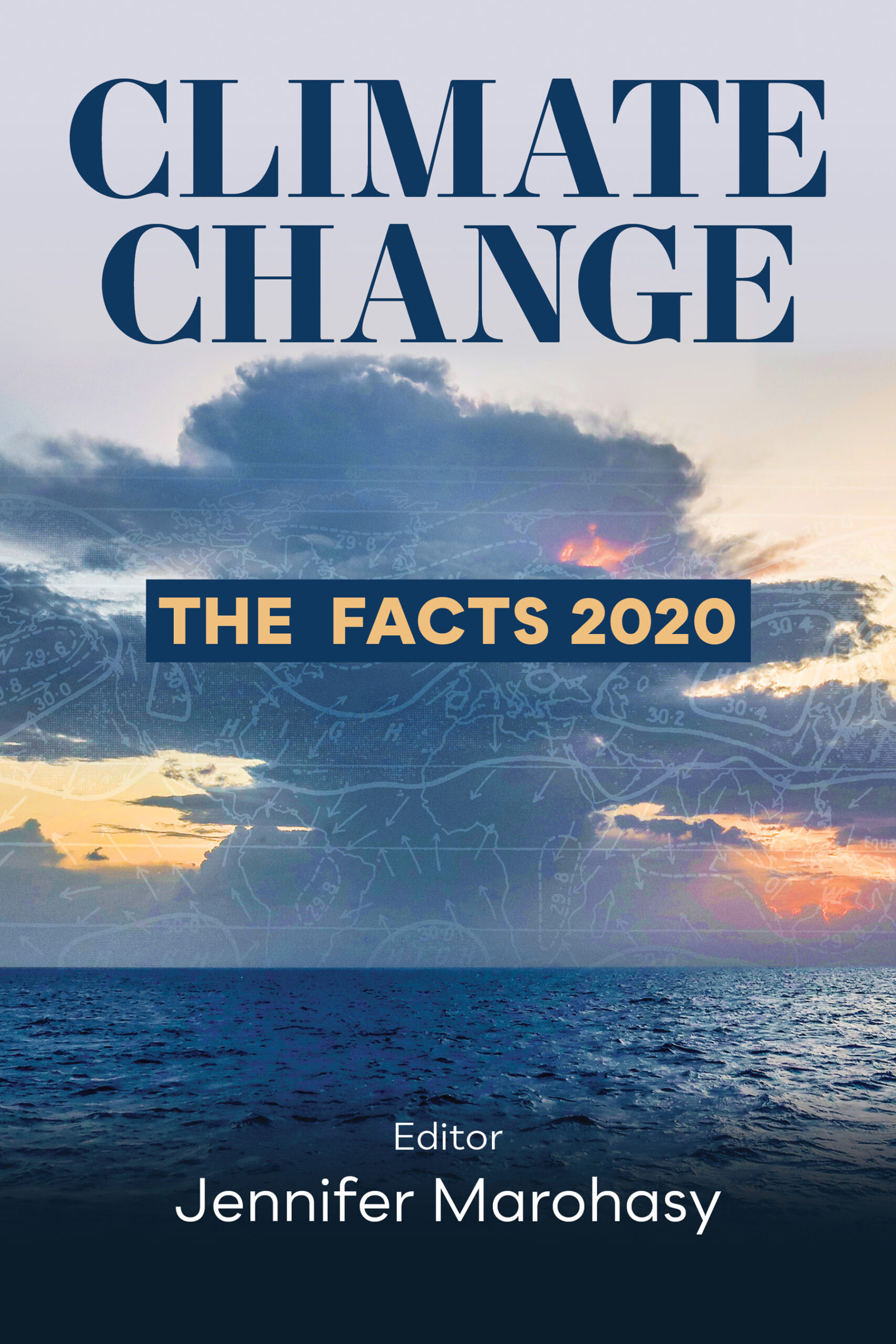 Ian Hore-Lacy is the Senior Advisor of the World Nuclear Association and a fellow of ISCAST. Since 1995 Ian has been occupied monitoring what is going on with nuclear energy worldwide and writing it up for lay readership.

Declaration of vested interest: apart from the boring economics of providing reliable and affordable electricity, much of the future of nuclear power depends on policies to reduce CO2 emissions. Having worked on nuclear energy matters for nearly 30 years, I retain a minor vested interest in that future of properly using God’s wonderful provision to provide abundant energy and which will incidentally address climate change concerns.

In the last 18 months, preoccupied by a nasty virus, we have learned that “science” can be a very flexible concept, used to justify all sorts of things. In relation to climate change, the IPA has sought to address this dilemma with a series of publications, the latest this year. This one assembles the writings of 19 authors.

The head of the OECD International Energy Agency Dr Fatih Birol said in 2019: “I find the Australian energy debate far too emotional, far too nervous and far too hot. It is hotter than the climate change itself.” (SMH 20/12/2019) There is plenty of scope for light rather than just heat at the level of science. And our energy policy is now largely hostage to perceptions of climate change tweaked according to various ideologies and interests.

I am a scientist who unreservedly accepts the basic science of climate change, but I am also profoundly sceptical of some aspects of what is put forward as science and the narrative that is built upon it. People need to be reminded that science is intrinsically sceptical from data collection to its interpretation, let alone modelling of projections. So, it ranges from the observable to what is inferred and even speculative. And we hardly need reminding that we all need to be sceptical of any dogma associated with vested interests of whatever kind.

So I ordered Climate Change: The Facts 2020 prepared to find the usual rather negative approach to the subject from conservative quarters. But my scepticism about the book was largely defused! The main substance of it is not the central science, which has been addressed in earlier editions, but there are some important chapters bearing upon it.

The early chapters were interesting, with the focus on Antarctica, and not pushing the broad argument one way or another. Chapters 10 to 13 “Towards a New Theory of Climate” seemed sensible but are beyond my competence, so I skimmed them. The next chapter on “Rainfall Powered Aviation” seemed a waste of space.

The editor’s Chapter 15 “Wildfires in Australia 1851 to 2020” is very good. In agreement with the author here, it beggars belief that so many journalists can write about fires without properly focusing on fuel load and the nervous delinquency of state governments since the 1980s in addressing it. Spending vast sums on firefighting for summer conflagrations is simultaneously futile and harmful. Harmful because many fires might be better left to run, as implied. But extensive fuel reduction burning in cooler months cannot sensibly be avoided.

I was not sure about Chapter 16 “Rewriting Australia’s Temperature History”. Certainly, if temperature records are in dispute, BOM need to explain themselves, a point made with great authority in the final chapter. Chapter 17’s “Perspectives on Sea Levels” is very helpful. I was aware of epeirogeny but unaware of post-glacial rebound. Certainly, the data from different parts of the world make any generalised statements on sea level change very suspect.

Kellow’s Chapter 18 “Climate Science and Policy-based Evidence” is salutary. I agree with his point that attempts at falsification are essential, rather than simply confirmatory papers, but data and methods must be out there. The whole subject is fraught with “noble cause corruption” it seems to me. Chapter 19 “Research Grants and Climate Catastrophism” seemed a bit tendentious, though clearly political funding will respond to popular concern in any field.

It’s worth recalling that Petteri Taalas, Secretary General of the World Meteorological Organisation, said that climate change “is not going to be the end of the world. The world is just becoming more challenging. In parts of the globe living conditions are becoming worse, but people have survived in harsh conditions.” (6/9/19) I guess the whole point of the book is to pose the question: “so what?” Climate is gradually changing, anthropogenic influence is part of the picture, but what this means in future is uncertain, as the UN Intergovernmental Panel on Climate Change (IPCC) Assessment Reports have made clear. The question of what policy measures are needed, and whether urgently, are beyond the scope of the book.

The final chapter by Scott Hargreaves entitled “A Descent into Sceptics Hell” is very insightful. In a review of the book by Dr John Maunder, President of the Commission for Climatology of the World Meteorological Organization from 1989 to 1997, said that the last chapter alone made the book worth buying. Hargreaves refers to the previous (2017) volume from the Institute of Public Affairs (IPA) “skewering the catastrophist tone in the media that cherry picks the worst-case scenarios from official bodies such as [IPCC], and which through a combination of mendacity, stupidity and concern for repeat sales aims to keep readers and viewers in a permanent state of fear.” Based simply on models, dissent is stigmatised. That rather expresses my own concern in assessing risks from the climate change which is occurring and my incredulity at the occasionally apocalyptic scenarios based on extreme projections presented as if consensus (such as IPCC’s “RCP 8.5”, a Representative Concentration Pathway with an incredible scenario of very high greenhouse gas emissions, in the Fifth Assessment Report). We await IPCC’s Sixth Assessment Report.

This final chapter adapts the nine circles of Dante’s circle of hell to trace the author’s “descent into climate scepticism”: limbo, the limits of reason, the IPCC, general circulation models, “Climategate”, peer-reviewed research, data homogenisation, raw temperature records, and finally “escaping hell”. His own “social and professional hell” is cooler than Peter Ridd’s in his stoush with James Cook University, but he grieves that some who disagree attribute bad faith and others have no idea of science, but attribute conspiracy. He believes that “catastrophist arguments are built on shoddy data and even shoddier modelling, and that nearly every idea that has been proposed for radical action is very bad indeed.” So, he is comfortable in a kind of climatological purgatory as he yearns for redemption!

To concisely conclude, the book is uneven in character and diverse in its coverage but has some valuable content.

Opinion, Reviews
Alan Gijsbers responds to Peter Stork’s “Wisdom as Interdisciplinary Space for Science and Theology”
Reviews
Review of “Thinking through Creation: Genesis 1 and 2 as Tools of Cultural Critique” by Christopher Watkin
Reviews
Review of “Unsettled: What Climate Science Tells Us, What It Doesn’t, and Why It Matters” by Steven E. Koonin
Reviews
Review of “The Bible & Ancient Science: Principles of Interpretation” by Denis O. Lamoureux
Past Issues, Reviews
Review—The Faraday Papers
Reviews
Review of “The Lost World of the Flood: Mythology, Theology and the Deluge Debate” by Longman and Walton
Reviews
Review of “The Genealogical Adam and Eve: The Surprising Science of Universal Ancestry” by S. Joshua Swamidass
Reviews
An environmentalist challenges alarmist environmentalism: A review of Michael Shellenberger’s “Apocalypse Never” by Ian Harper
Reviews
“The Madness of Crowds”: ISCAST fellow Ian Hore-Lacy’s review published on the Ethos site
Reviews
John Ortberg on boiling kettles and remodeled apes
Reviews
Book Review—The New Cosmic Story: Inside our Awakening Universe
Reviews
A theology student among scientists: A personal review of COSAC 2018
Reviews
Book Review—Vulnerability and care: Christian reflections on the philosophy of medicine