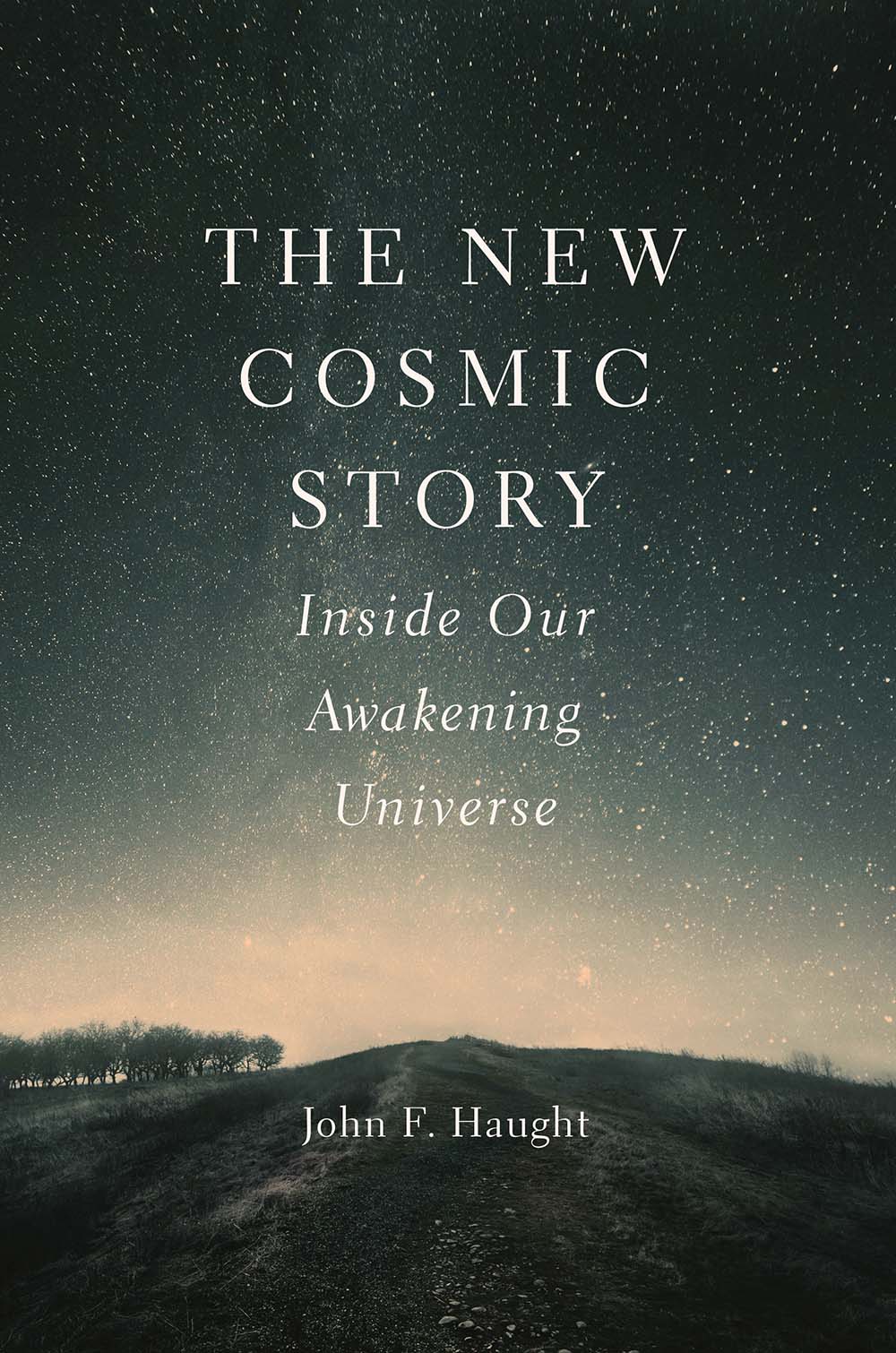 Review of The New Cosmic Story: Inside our Awakening Universe by John F Haught.Andrew Wood, April 2018.

The New Cosmic Story: Inside our Awakening Universe

John Haught is distinguished research professor, Georgetown University, Washington, DC, who brings a Roman Catholic theologian’s perspective to the interface between science and faith. In this book he examines the impact the emergence of religion has made to our understanding of the cosmos and secondly what our evolving and awakening understanding of the cosmos as an unfinished drama tells us about religion.

A major assertion is that there are three ways of viewing the cosmos: the author calls these ‘archaeonomy’, ‘analogy’ and ‘anticipation’. Archaeonmy means essentially digging into the past to make sense of present phenomena; analogy is about regarding the cosmos as a set of temporal imitations of a timeless supernatural realm and anticipation is examining the emergence of aptness or ‘rightness’ early in human history, but is a process continuing to a richer future.

Haught argues that scientism (the view that the scientific method alone can yield true knowledge about humans and society) is essentially archaeonomy, with, in the main, a pessimistic outlook, with religion viewed as a ‘prop’ to the unsophisticated, ‘needing to be outgrown’. Similarly analogy (or ‘sacramental’ view) is viewed as deficient, in that the ‘universe is precluded from becoming ‘more’, remaining in its fallen state’. Anticipation is seen as the ‘right’ way forward, in that it ‘gives thanks that the cosmos is in the present undergoing an intensification of its being and that in the future the world may become more than what it has been and more than what it is now’.

However, the book does not spell out in any great detail how rightness will prevail over wrongness nor what evidence there is that this has occurred thus far in human history. It is noted that since the earliest emergence of cave paintings to indicate ‘god-consciousness’ there has been an exponential growth of enduring cultural artefacts. Today we enjoy the products of over 7000 years of human minds, including writing, painting, music, architecture and so on, including science and technology. Even the last 100 years has added a vast catalogue of items from many nations and cultures enabling the standards of communications, nutrition and healthcare we enjoy today. Most of us would prefer to live now rather than any time in the past. So, in this sense, there has been an ‘intensification’, but the book also acknowledges that nature is imperfect ‘including design faults and evolutionary suffering’.

To my mind, the shortcoming of this book is that it has adopted a stance designed to encompass all religions, with examples of ‘rightness’ drawn from many religions, including the assertion that ‘Jesus called it the kingdom of heaven or the reign of God’. For the Christian, the cross, second coming, judgement and transformation are essential elements of the establishment of the reign of God, but this is not discussed, except in very general terms. The making of the book accessible and relevant to a broad readership is laudable, but not to the extent of omitting relevant components of particular religions.

Although a student of Pierre Teilhard de Chardin, there is little in this book on one of Teilhard’s central themes, the centrality of Christ to the future of the cosmos, with creation incomplete until God in Christ was ‘all and in all’ (1 Cor 15:28). In his recent book ‘Flourishing’, which is also written for a multi-faith readership, Miroslav Volf seems to have no qualms about asserting ‘waiting for the Christ to come in glory and echoing in our daily lives the Christ who came in humility, we are to be neither idle nor coercive but always engaged’.

This said, there are a lot of useful observations on ‘New Atheists’, in particular the contradiction between their assertions of a pointless universe yet a vehement concern for ‘truth’. A section on ‘why trust our minds’ reflects on the apparent contradiction between the view of the mind as a product of blind chance and the way most of us view our minds with exceptional confidence. Haught comments: ‘The materialist’s version of mind’s emergence maintains that the laws of physics and natural selection can transform the dross of mindlessness into the lustrous gold of justifiably self-confident minds simply by adding the elixir of deep time.’

A section deals with ‘the wrongness of evolution’, not in the sense that as a theory it is flawed, but because it appears to operate in such an uncaring way. However, the author is at pains to emphasise that the same process also gives rise to cooperativity and creativity and also ‘conscious beings that aspire to rightness’. ‘Anticipation therefore fully acknowledges the imperfections of nature, including design flaws and evolutionary suffering. Yet it makes room for redemption in a narrative coherence not yet attained’.

The developments of science and the views of scientists are thus a constant thread throughout the book. However, the overall comment is that science may illuminate the ‘outside’ story, but a full telling of this story also needs the ‘inside’ developing of religious awareness. There is much to reflect on in this book and its overarching message of hope is refreshing.

Reviews
“Can a Scientist Believe in Miracles? An MIT Professor Answers Questions on God and Science” by Ian Hutchinson
Reviews
“The Nature of Things: Rediscovering the Spiritual in God’s Creation”
Reviews
“Blind Evolution? The Nature of Humanity and the Origin of Life” by David Frost
Reviews
“Why We Disagree About Climate Change: Understanding Controversy, Inaction and Opportunity” by Mike Hulme
Reviews
“Death Before the Fall: Biblical Literalism and the Problem of Animal Suffering” by Ronald E. Osborn
Reviews
“Ethical Basics for the Caring Professions: Knowledge and Skills for Thoughtful Practice” by Graeme McLean
Reviews
“Science, Religion, and the Protestant Tradition: Retracing the Origins of Conflict” by James Ungureanu
Reviews
“Galileo Goes to Jail: And Other Myths about Science and Religion” by Ronald L. Numbers (ed.)
Reviews
“Transhumanism and the Image of God” by Jacob Shatzer
Opinion, Reviews
Alan Gijsbers responds to Peter Stork’s “Wisdom as Interdisciplinary Space for Science and Theology”
Reviews
“Thinking through Creation: Genesis 1 and 2 as Tools of Cultural Critique” by Christopher Watkin
Reviews
Review of “Unsettled: What Climate Science Tells Us, What It Doesn’t, and Why It Matters” by Steven E. Koonin
Reviews
Review of “Climate Change: The Facts 2020” by Jennifer Marohasy
Reviews
Review of “The Bible & Ancient Science: Principles of Interpretation” by Denis O. Lamoureux
Past Issues, Reviews
Review of “The Faraday Papers”
Reviews
Review of “The Lost World of the Flood: Mythology, Theology and the Deluge Debate” by Longman and Walton