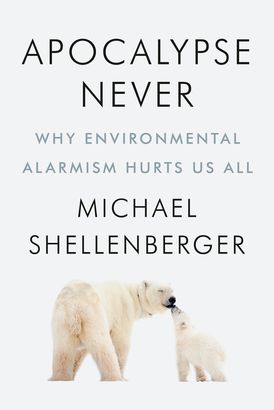 What makes Michael Shellenberger so intriguing – or infuriating, depending on your point of view – is that his credentials as an environmentalist are impeccable. He was nominated by Time magazine as a “Hero of the Environment”, won the Green Book Award from the Centre for Science Writings in 2008, and has been invited to serve as an Expert Reviewer for the Intergovernmental Panel on Climate Change (IPCC). Shellenberger is certainly no climate change “denier”.

Nor is he “right wing”, the other charge levelled against people who adopt a heterodox position on climate change. He set up a chapter of Amnesty International at his high school when he was 15 and spent a semester of his final school year living in Nicaragua to witness the Sandinista socialist revolution. During his college years, he went to Brazil, learned Portuguese and lived and worked with the Landless Workers’ Party in one of Brazil’s most remote, semi-Amazonian states. He became so involved that he thought this might be where he would spend the rest of his working life.

Instead, Shellenberger spent his career studying and writing about environmental degradation, especially when driven by poverty and underdevelopment. His deep familiarity with both is born of personal experience over decades travelling to and living in some of the world’s poorest and least developed countries, like Congo and parts of Brazil. Observation at such close proximity led him to a nuanced appreciation of the liberating effects of economic development on the lives of the poorest of the poor.

The richer people are, the more they can afford to care for the environment. Poor people have no choice, when struggling with energy-inefficient technology, but to burn down forests and kill predatory elephants and gorillas. Opposing economic development in poor countries ensures that more habitat will be lost for endangered species as well as condemning more human beings to lives that are “nasty, brutish and short”. As an “environmental humanist”, Shellenberger is as concerned about the former as the latter.

The second limb of his assault is that environmental alarmism abuses science in the pursuit of a quasi-religious atonement for the perceived sins of humankind against nature. When pressed, alarmists almost always concede that their claims transgress the strict limits of what the evidence will allow but justify exaggeration on the need to spur political action. Science is recruited time and again to shut down dissent and reasoned counter-argument: “I want you to listen to the scientists”, begs Greta Thunberg, as if an appeal to science ends rather than commands further debate.

If it were just a matter of religious fervour, that would be reason enough to push against the apocalyptic claims of the alarmists. On this issue, Shellenberger writes at some length, and fascinatingly, about the psychological need that environmental alarmism meets for its adherents. He has walked this road himself, rejecting the “apocalyptic, destructive and self-defeating” influence of alarmism, which led him into angst and depression, and affirming environmental humanism as his “guide to positive, pro-social and ethical behaviour”.

But there is a darker side to alarmism that Shellenberger is at pains to expose. This is the self-interested hypocrisy of proponents of renewable energy in making common cause with fossil fuel suppliers to defeat the one technology that can promise zero emissions as well as the economic development potential of the densest form of stored energy known to humankind – nuclear power. He is scathing of those whose faux environmentalism leads them to champion low-density energy sources, like wind and solar, when their impact on endangered species – let alone carbon emissions given the need for gas-fired backup – is far more deleterious than high-density, base-load nuclear power.

This is an important book, not because Shellenberger is the first to bring some balance into the (too often hysterical) debate about climate change and the environment. Matt Ridley’s Rational Optimist covers similar territory, although Shellenberger’s endnotes and references are more extensive – fully 124 of the book’s 413 pages! Apocalypse Never is important because it is written by an insider – someone whose environmentalist credentials are beyond reproach and whose passion for humanity is revealed on almost every page. Those who genuinely want us to “listen to the scientists” would do well to hear the science speaking through the pages of this book. They might also find greater reason to be hopeful about the future of economic progress and the environment than they had dared to think possible.

Ian Harper is a fellow of ISCAST, Dean of the Melbourne Business School, and a board member of the Reserve Bank of Australia. His ISCAST profile is here.

(Although we have not enabled comment streams on the ISCAST site, we are happy to publish some comments below articles.)

I have just finished reading Michael Shellenberger’s Apocalypse Never – Why environmental alarmism hurts us all. It is very good, and meticulously referenced (123 pp of end notes!). The last chapter on False Gods for Lost Souls has some insightful comment.  He suggests that ecology has imposed a fundamentally religious idea on to science. He contrasts what he calls apocalyptic environmentalism – his earlier position – with environmental humanism, his present position, grounded “first in our commitment to the transcendent moral purpose of universal human flourishing and environmental progress, and then in rationality.”  The apocalyptic environmentalism effectively “condemns human civilisation and humanity itself” by twisting the Judaeo-Christian religion so that instead of seeing “human problems stemming from our failure to adjust ourselves to God” its passionate advocates see those problems stemming “from our failure to adjust ourselves to nature.” Scientists now play the role of priests in addressing this spiritual problem. It connects us with something larger than ourselves, and “provides a new story about our collective and individual purpose. It designates good guys and bad guys … in the language of science, which provides it with legitimacy.” Then “the trouble with this new environmental religion is that it has become increasingly apocalyptic, destructive, and self-defeating.”

He continues: “If the climate apocalypse is a kind of subconscious fantasy for people who dislike civilisation, it might help explain why the people who are the most alarmist about environmental problems are also the most opposed to the technologies capable of addressing them, from fertiliser and flood control to natural gas and nuclear power.” The narrative that major environmental problems are “consequences of greed and hubris” needs to replaced by recognition that they are instead “side effects of economic development motivated by a humanistic desire to improve people’s lives.”
Incidentally but importantly he contrasts the actual science related to climate change with the way it has been presented in IPCC’s Summary for Policymakers, with shameless exaggeration and pillorying scientists who objected, well documented. This has long been a concern of mine.
Share Tweet Email