"Thinking through Creation: Genesis 1 and 2 as Tools of Cultural Critique" by Christopher Watkin | ISCAST – Christianity. Science. In conversation

“Thinking through Creation: Genesis 1 and 2 as Tools of Cultural Critique” by Christopher Watkin 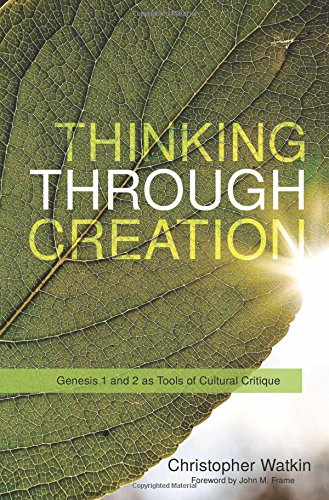 I thoroughly concur with Watkin’s general thesis to engage as a Christian with our world, our society and our culture. We both agree that we need to create a strong bridge between the world of God and the word of God.  Watkin seeks to do this by developing a theoretical framework from which he can thoughtfully engage and critique our culture. He described many possible theories to analyse our culture, for example Marxist or feminist theory, but Watkin offers a biblical theory through which to interpret society and culture. Further he seeks to do this through the lens of the first two chapters of the Bible. It is a bold attempt and he is to be congratulated for trying it, but I find the result disappointing.  The ancient worldview of the first two chapters of Genesis has been distorted by Watkin through the lens of reformed systematic theology.  The result is a reformed theory, heavily affected by the enlightenment rationalism and foundationalism in which reformed systematic theology was developed. I also have difficulty with the reformed form of apologetics which seeks to expose the wrongness of other views and the rightness of their own view.  Watkin has done this by the device of dichotomising and diagonalising. That is, he identifies a topic, dichotomises it into two conflicting positions and then resolving the dichotomy by what he calls diagonalising.  He claims such an approach is biblical, but there is no example within Scripture of such an approach.  Two examples of many.  He creates a dichotomy between impersonal structure and unstructured persons, and diagonalises them by the statement “the Lord is good.” Another is the dichotomy between the one and the many (that all that is finally has a unity, or whether all remains diverse). This Watkin diagonalizes by considering the Trinity. There are many other examples. I find this a rather artificial and unconvincing approach and I believe there are better approaches to these issues.

Watkin makes much of the week structure of the first creation story, and relies on Michael Schluter’s advocacy of the Sabbath as good for society. He builds a good case, but fails to recognise that the Bible is far more ambivalent about the Sabbath than Watkin’s linear exposition of the subject. He fails to acknowledge that the controversy over the Sabbath is a major factor behind Jesus’ crucifixion and that Paul acknowledges that Christians are divided according to conscience between those who deem all days the same and those who value a day of rest (Col 2:16ff). This discussion is a good illustration of how in the reformed world view Scripture is forced to have a single viewpoint rather than that Scripture contains a number of different points of view, without resolution.

Watkin believes Genesis deals with two major doctrines of the nature of God and the nature of creation, and he explores both of these.  There is much of value in considering God as eternally personal and that love is from eternity because it existed between the three persons of the Trinity, but this is a huge extrapolation from Genesis 1 and 2, and barely hinted at by this text. Watkin bravely enters the issue of the nature of humans as creatures in the image of God, but his bumper sticker summaries of major thinkers on the nature of humans (p92) trivialises their important insights and only partially represents their deep thought. For instance, to reduce Adam Smith’s contribution to our understanding of humanity to the division of labour ignores what Smith regarded as his more important work, his Theory of Moral Sentiments, exploring the role of the virtues in human behaviour.

Watkin’s theology of the environment contains a reasonable dichotomy between worshipping the earth or exploiting it. Watkin diagonalises this with the biblical statement “fill the earth, subdue it and have dominion over it,” as if this resolves the dichotomy, but a lot more needs to be said to explore the nature of human stewardship of the world God has made, how in practice we might care for the environment, and address issues like climate change.

Watkin would have liked to have had a book like this when he was a new Christian in his undergraduate year. A book like this would certainly open up the issues. It provokes a lot of thought.  However, I find the conclusions quite limited. I believe the content of this book would be enhanced by engaging in a much broader dialogue with Christian theologians and scientists from other Christian traditions and from the secular world.

For instance the book would benefit from considering how to interpret the first two chapters of Genesis on their own terms. This is not a new issue.  It has been thoroughly explored from within the Reformed tradition by GC Berkouwer[1], in ISCAST by John Thompson[2], and John Dickson[3], and outside of ISCAST by Biologos[4] and John H Walton[5] among others.

The book would benefit from developing a broader biblical theology of creation. I suggest Tom McLeish’s Faith and Wisdom in Science[6] and Jurgen Moltmann’s God in Creation[7] as starting points.  McLeish in chapter 3 summarises William P. Brown’s Seven Pillars of Creation[8], showing that a creation theology looks at the whole of the first testament rather than just the first two chapters.  The issues Watkin raises need to be addressed, but at a more sophisticated level than his current approach.

Have I missed something in my disappointment that those who wrote the soundbites on the back of the book eulogise?  “Brilliant, …take up and read …it helps to reach the world for the gospel …a seminal work which will become a classic …refreshing …”  I think I have, and that distresses me.  It shows the gulf that exists between those of a conservative reformed Christian perspective and those like me who adopt a more, still evangelical, post-modern secular but Christian approach to knowledge.  The dialogue between us needs to continue, for the benefit of us all.

[1] Berkouwer GC.  Studies in Dogmatics: Holy Scripture. Eerdmans 1975.  See also his chapter on Scripture in A Half Century of Christian theology. Eerdmans 1977.

[3] Dickson JP The Genesis of everything.  https://iscast.org/wp-content/uploads/attachments/Dickson_J_2008-03_Genesis_Of_Everything-6.pdf

[5] Walton JH.  The lost world of Genesis one: ancient cosmology and the origins debate. IVP. 2009.

[8] Brown WP. The seven pillars of creation: the Bible, Science, and the ecology of wonder. OUP 2010.

Reviews
“Can a Scientist Believe in Miracles? An MIT Professor Answers Questions on God and Science” by Ian Hutchinson
Reviews
“The Nature of Things: Rediscovering the Spiritual in God’s Creation”
Reviews
“Blind Evolution? The Nature of Humanity and the Origin of Life” by David Frost
Reviews
“Why We Disagree About Climate Change: Understanding Controversy, Inaction and Opportunity” by Mike Hulme
Reviews
“Death Before the Fall: Biblical Literalism and the Problem of Animal Suffering” by Ronald E. Osborn
Reviews
“Ethical Basics for the Caring Professions: Knowledge and Skills for Thoughtful Practice” by Graeme McLean
Reviews
“Science, Religion, and the Protestant Tradition: Retracing the Origins of Conflict” by James Ungureanu
Reviews
“Galileo Goes to Jail: And Other Myths about Science and Religion” by Ronald L. Numbers (ed.)
Reviews
“Transhumanism and the Image of God” by Jacob Shatzer
Opinion, Reviews
Alan Gijsbers responds to Peter Stork’s “Wisdom as Interdisciplinary Space for Science and Theology”
Reviews
Review of “Unsettled: What Climate Science Tells Us, What It Doesn’t, and Why It Matters” by Steven E. Koonin
Reviews
Review of “Climate Change: The Facts 2020” by Jennifer Marohasy
Reviews
Review of “The Bible & Ancient Science: Principles of Interpretation” by Denis O. Lamoureux
Past Issues, Reviews
Review of “The Faraday Papers”
Reviews
Review of “The Lost World of the Flood: Mythology, Theology and the Deluge Debate” by Longman and Walton
Reviews
Review of “The Genealogical Adam and Eve: The Surprising Science of Universal Ancestry” by S. Joshua Swamidass