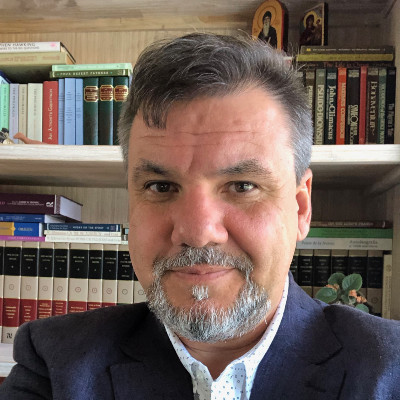 Associate Professor Doru Costache is an Australian clergyman and academic born in Bucharest, Romania. Recently, he was appointed the ISCAST Research Director. He lives with his wife, Otilia, in Sydney’s Northern Beaches area, where they enjoy bushwalking and stargazing. They have a grown daughter who prefers city life. When it rains, all three find refuge in science-fiction literature, movies, and TV series.

Doru is a graduate of the University of Bucharest (Romania, 2000), where he earned a doctorate in theology for a thesis on the anthropic cosmological principle assessed through the lens of two theologians, one medieval (Maximus the Confessor) and one modern (Dumitru Stăniloae). Since 2016, he lectures in patristic studies at St Cyril’s Coptic Orthodox Theological College and is a faculty member of the Sydney College of Divinity’s Graduate Research School. He lectured in patristic studies for St Andrew’s Greek Orthodox Theological College (2005-2017) and also tutored and lectured in systematic theology for the Department of Orthodox Theology of the University of Bucharest (1995-2004). He is an honorary Associate of Department of Studies in Religion, the University of Sydney (2017-2021). He was an Adjunct Senior Lecturer with the School of Philosophy and Theology, the University of Notre Dame Australia (2017-2019) and a Durham International Senior Research Fellow of Institute of Advanced Study, Durham University, United Kingdom (Epiphany Term, 2018).

For almost as long as his twenty-plus years of academic work, he sharpened his pastoral skills as an ordained minister of the Orthodox Church in a range of settings, from parishes to missions to chaplaincy. Since 2017, he guides a little ‘mission church’ dedicated to Saint Gregory the Theologian, in Mona Vale NSW.

Apart from his ministry and his academic work, he has a rich experience of mentoring young people for ministry, academic work, and life. His approach to mentoring is Socratic—thus heuristic—also finding inspiration in Pierre Hadot’s take on philosophy as a way of life.

Doru is interested in the articulation of the early Christian worldview at the crossing of scriptural wisdom, ancient cosmology, and theological insight, together with drawing lessons on this articulation for contemporary science & faith conversations. He recently finished a book on this topic, currently shivering with anticipation at the impending verdict on the part of a European publisher.

He is a co-chair of the ‘Cosmology’ group within the project Science and Orthodoxy around the World II, hosted by National Hellenic Research Foundation, Athens, Greece (2020-2023).

He was a participant in project Science and Orthodoxy around the World, hosted by National Hellenic Research Foundation, Athens, Greece (2016-2019).