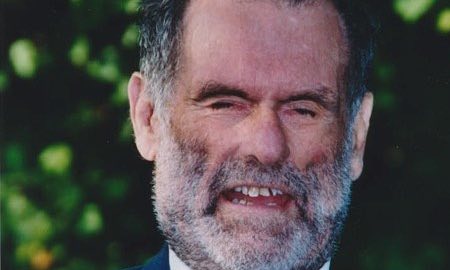 ISCAST friends might be interested in the Melbourne special screening of a film documenting the life of an extraordinary man. Hull’s autobiography, Touching the Rock (1990), was described by Oliver Sacks as “Staggering. The most extraordinary, precise, deep and beautiful account of blindness I have ever read. It is, to my mind, a masterpiece.”
Date: Wednesday 26th April, 6.30pm
Venue: Cinema Nova, 380 Lygon St, Carlton Vic.
Film: Notes on Blindness, with a special introduction by Jan Dale, Prof. John Hull’s sister.
Tickets: Online ticketing here

An obituary for Prof. John Hull, in The Guardian, is here and Hull’s sister writes: “Australian-born John was considered one of the most influential religious educators in the world.  He held the first full professorship in Religious Education in England (at Birmingham University). Became blind in mid life after a history of eye problems. Kept an audio diary recording his struggle with loss of sight and subsequently published it in a book Touching The Rock: An Experience of Blindness. The filmmakers discovered the book and decided to make a documentary and then discovered that the original diary tapes still existed. These are used as the film’s dialogue with actors lip synching. Sadly John died as a result of an accident just after the filming began. The film has won many awards and received extraordinary reviews.”

The special screening is on April 26th at Cinema Nova at 6.30 but only if enough tickets are sold by 17th April. Here is a link to a trailer and information on how to buy tickets.

Please note: this event is not organised by ISCAST