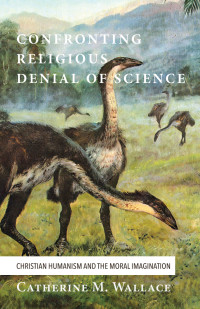 The nature of the relationship between science and religion is no stranger to the public square and has received diverse treatments from numerous people. Catherine Wallace adds her perspective to the mix with Confronting Religious Denial of Science: Christian Humanism and the Moral Imagination (Wallace, 2016). At the onset of the book, Dr Wallace lays out the specific problem she seeks to address: “The problem at hand is in the news week after week: a hard-Right, highly politicized Christian fundamentalism has been repeatedly involved in a denial of science” (p. 1). While it manifests itself in different matters of science (e.g., geologic history, evolution, climate change), she notes that “the bigger problem is the extent of fundamentalist religious hostility to science in general” (p. 1).

Dr. Wallace also lays out her solution to this problem in chapter 1:

As a Christian, I am obligated to speak up on such issues, because Christian fundamentalism can only be stopped from within Christianity and in Christian terms. The illegitimacy of their claims needs to be clear to everyone, believers and nonbelievers alike, because that and that alone will deny them the religious credibility and the religious political cover that they seek. That’s what I intend to do. (p. 2)

Before fleshing out this solution, in chapters 3-5 she tracks the historical circumstances that led to the problem. She traces the problem back to a Victorian-era desire for “absolute authority” (p. 22), stemming either from religion or science. While Wallace does acknowledge the contributions of “dogmatic scientism” (p. 21) to this problem, she uses the majority of the book (chapters 6–13) to put forth a view of Christianity to undermine Christian fundamentalism. Her conception of Christianity has the following tenets:

In offering this view of Christianity as a substitute for Christian fundamentalism, Wallace seeks to demonstrate that Christianity is not a “rival for science” (p. 47). Her interpretation of Christianity does successfully undermine Christian fundamentalism. However, it left me with four specific questions that I’m curious to know her thoughts about. First, if miracles are symbolic stories that didn’t actually occur, did Jesus really rise from the dead and is there an actual hope of a future resurrection of people? This is an important question because of what the apostle Paul argues in 1 Corinthians 15:13-19 (NRSV):

It’s also an important question because resurrection is a core element of historic Christianity, as indicated by the explicit mention of resurrection in the Apostles’, Nicene, and Athanasian Creeds (Grudem, 1994).

Third, why shouldn’t our understanding of God at least accord with the large amount of verbal and written communication of God’s nature that are captured in the Bible?

Fourth, if the God of Christianity isn’t in control of everything like an engineer, what is the justification for our assumption of nature’s uniformity in daily decision-making and science (See Hanes, 2019 for a summary of why such justification is important)?

Dr Wallace’s willingness to confront the denial of science within Christianity is good, necessary, and admirable. Indeed, unnecessarily conservative views on science have weakened the reputation of Christianity and its voice within a pluralistic society. While I respect the time, effort, and thought that she has dedicated to this book, my personal conviction is that this problem can be addressed in a way that preserves the elements of Christian theology that she argues against (e.g., reality of miracles, prayer as communication to God, the Bible as the primary revelation of God’s nature, God’s complete control over nature). Indeed, it is my perspective that the Bible includes both literal and symbolic elements. Regardless of one’s views, I believe readers will find Dr Wallace’s book to be a thought-provoking contribution to the wide, vast discussion about the relationship between science and Christianity.

NRSV. Scripture quotations are from the New Revised Standard Version Bible, copyright © 1989 the Division of Christian Education of the National Council of the Churches of Christ in the United States of America. Used by permission. All rights reserved. Obtained from: https://www.biblegateway.com/passage/?search=1+Corinthians+15&version=NRSV.