Passion, Imagination and Creativity in Science, Story, Music and Art 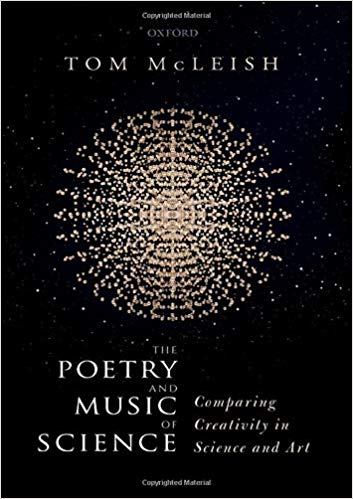 Book review by Alan Gijsbers of Tom McLeish’s The Poetry and Music of Science. OUP. 2019. 355 pages.

Tom McLeish, an ISCAST Distinguished Fellow, is the former pro-vice-chancellor for research at Durham University, and now Professor for Multi-disciplinary Natural Philosophy at York University.  He is therefore uniquely placed to move across a wide range of disciplines, across the sciences, music and the arts. This book is the result of his reflections. This is a breathtakingly brilliant book.  The introduction made me tingle in anticipation and the conclusion made me shed a few tears of awe and joy.  I was allowed to feel like that because one of McLeish’s themes is that he welcomes the varied emotions the scientist and artist feel in their creative processes.  These include, among others, inspiration, anticipation, frustration, despair, determination, excitement and pleasure.

Abraham Kaplan in his The Conduct of Inquiry, a book about a scientific approach to the psychological and social sciences, describes “logic in use” versus “reconstructed logic.”  The former is what a scientist does, the latter is how the scientist justifies her conclusions to her colleagues.  Hypothesis generating versus hypothesis testing, is an approximation.  Most discussion of the scientific process focuses on the second half, ignoring the frustrating challenge of asking the right question, or generating testable hypotheses, so elegantly described in McLeish’s first book, Faith and Wisdom in Science.  But the scientific process is more than hypothesis defining and hypothesis testing.  It is the imaginative way we re-envisage the world, through the lens of the particular disciplines we bring.  It is the way we perceive the world or the “sheer inhuman otherness of matter.” As these perceptions change in pursuit of our disciplines, we then see more truly, and more deeply.  Thus we find truer wisdom and understanding.

Reading McLeish, I was struck when he quoted the words with which God challenged Job. Can Job “determine the laws of heaven and establish its rule on earth?” (Job 38:33).  The rhetoric suggests he could not, but when the true Son of Man came on earth, he inspired his disciples to pray for God’s will to be done on earth as it is in heaven! Shades of the ISCAST Kingdom Project.

What motivated McLeish to write this book?  He was appalled when he met with bright young high school students because they were turned off from doing science. In their perception, imagination, creativity and inspiration are found in the arts, not in science.  Thus McLeish wrote this book to debunk this common perception of science.  He expounds a commonality between the arts and the sciences and bridges the two cultures gap bemoaned by C. P. Snow.  This is the great strength of this book.

What are these perceptual lenses through which we grapple with matter?  McLeish discusses these social imaginaries without using that term.  He speaks instead of the amazing imagination which inspires say an Einstein to visualise the world differently, or how McLeish and his colleagues envisage complex fluids. He then finds resonances in the way in which artists perceive and depict their subjects.  McLeish explores the similarities in the creative processes, how ideas and mental pictures butt against the limitations and boundaries of their disciplines.

These perceptions could be strengthened by an exploration of Michael Polanyi’s plausibility structures or Charles Taylor’s social imaginaries, how these develop and how these shape the perception not just of the individual scientist but the whole discipline. Inevitably there are those ‘in the know’ who ‘get it’ whereas others just do not see.  Is this just Gnosticism?  What are the dynamics involved?

Our sciences have been strangled by the limited plausibility structure which reduces the scientist’s perceptions to either simple, elegant mathematical equations or to simple laws.  McLeish elegantly describes other lenses, first the visual, and the imaginative, secondly the auditory in music and its creative resonance with mathematics, and thirdly the narrative – the novel and the broader story.  Are these the only lenses?  And what validates these lenses?

It is inevitable that even a polymath like McLeish leaves some areas unaddressed.  There are other narratives than novels.  His whole book is an example of historical reconstruction. Historians have their own skills and lenses, as Brooks and Cantor in their Reconstructing Nature explore.  Their big thesis is that there is no large meta-narrative. History is perceived differently by different historians. Events need to be interpreted within their historical and biographical context, and in the end, sometimes there are hidden biases in the way events are seen.

As a clinician I take histories from patients every day.  I have my own interpretative lenses within which I reconstruct their story. I use biomedical models to understand abnormalities of structure and function.  But this is only part of the story.  The narrative of the patient’s illness needs to be understood within a broader human context. Nor is this reconstruction only in the doctor’s mind.  We need to allow the patient to satisfactorily reconstruct the events of their history (the time rate of change of symptoms) so that they make flourishing therapeutic decisions towards their health or come to terms with their demise.

When McLeish discussed the relation between what Anselm of Canterbury described as aspectus and affectus, between what we see and how we feel about what we see, McLeish talked about the integration of reason and emotion.  It reminded me of Antonio Damasio’s book, Descartes’ Error. I was therefore excited when I turned the page to find that McLeish had footnoted Damasio and his seventh chapter on the classification of the emotions. However this quickly changed to disappointment, for McLeish did not expound Damasio’s main point, that Descartes’ separation of mind from body led to a separation of reason from emotions.  They are even more integrated than the exposition of aspectus and affectus suggests.

This however is a minor quibble compared to the richness of understanding and insight that McLeish brings.  This book is top shelf and deserves to be widely read.  I must admit to feeling a little daunted by some of the musical notation but a quick scroll through YouTube allowed me to listen to both Shostakovich’s 8th string quartet and Schumann’s Konzertstück for four horns and orchestra. Extra input: extra bliss!

One extra question.  What then makes science science?  In what way is it different from other cultural pursuits?  There are similarities between the experimental processes and novel writing, but experimentation is not the same as novel writing.  That question requires further discussion.